Coronavirus: telcos are picking up where the NBN is failing

Q: What was the problem experienced with the recent Windows 10 update issued last week? (Early March)

A: I’m unaware what the problem was as the update that installed on all my computers worked fine. Less than 1% of early downloaders experienced problems with the update. Microsoft corrected and reissued the update within days of the initial release.

Q: I have a year old HP Envy laptop which has exhibited intermittent Blue Screen of Death (BSOD) error messages over the last few months. On occasions, I get multiple blue screens with different error messages. I keep rebooting until it comes good which so far has worked. I think HP replaced the motherboard but I’m still getting the odd blue screen error. It doesn’t happen often enough to make me want to take serious action however, but is there anything you can suggest to help?

A: The fault will most likely occur at the most inappropriate time. As the machine is still under warranty, I’d suggest asking for a replacement.

Q: My desktop computer is about 5 years old and is running Windows 7. Yesterday it displayed a black screen which suggested I set SATA to AHCI (Advanced Host Controller Interface). However, before I could do anything it starts anyway. Is this problem with all Windows or just Windows 7?

A: I’ve seen that problem before and most likely occurs in Windows 7 & 10. As the black screen only lasts 2 seconds, I would just accept it as just an annoyance.

Q: This problem relates to a friend’s computer that I spent a couple of hours working on recently and couldn’t solve. The computer freezes and won’t reboot. It only restarts when the power is turned off completely. I tried Google and scanning without success.

A: When you start getting those sorts of problems it could be related to the hard drive dying. Do a ScanDisk in Safe Mode and see if that solves the problem.

Q: I’ve found a few programs that will display the new picture format HEIC (High-Efficiency Image File Format), Gimp is one, another is a free HEIC viewer. I’ve downloaded a browser extension from the Microsoft Store and installed it. It seems to install correctly but I can’t find it?

A: Have you tried adding the extension to a different browser, such as the new version of Edge to see if that works.

The following 2 questions from February’s Q&A to George Skarbek were omitted from the February SIG report that appeared in PC Update.

Q: I’m running Windows 7 Ultimate on my desktop and I understood it would no longer be updated. However last night when I turned my desktop on, it updated as it had in the past. I was also able to update Security Essentials. Will Win 7 still keep updating?

(Tech Eds: We do not endorse this advice, as Windows 7 is no longer a secure operating system, and it would be a risk for members to keep running it. An upgrade from Windows 7 to Windows 10 is still free from Microsoft, and would be the better option. Organisations such as the US Navy are receiving updates to Windows 7 because they are paying for it, and these updates will not be available to consumers).

Q: When I was running Windows 7 I was very happy with its calculator, but I haven’t been able to find that calculator in Windows 10. How can I find the Windows 10 calculator? Can I copy the calculator from Windows 7 into Windows 10? An internet search (copied below) shows how to transfer the Windows 7 calculator to Windows 10.

When travelling overseas keeping your items secure is very important. Trevor Hudson recently travelled to America and displayed an anti-theft shoulder bag he purchased for his trip. Trevor outlined some of the bag’s many security features such as a cut-proof shoulder strap incorporating a metal wire into the shoulder strap, woven mesh in the bag outer covering and lockable zips. The bag looks like a conventional shoulder bag as the first two features are completely invisible to the naked eye. The security bag was a Travelon brand costing $100 on special from Strandsbags at Knox City. After displaying the bag to members, Trevor playing a short YouTube video he prepared showing all features mentioned above including views of the bags inner compartments. The video is titled “Anti-theft Security Bag” and can be viewed on YouTube https://www.youtube.com/watch?v=0BXaa2TZj6Y. 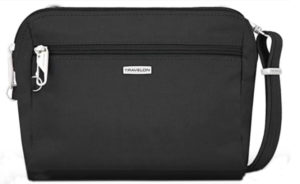 Following Trevor’s presentation, Paul Woolard outlined why Microsoft’s free antivirus software Windows Defender is now a worthy choice for your computer antivirus needs. Windows Defender has improved significantly over the last few years and is now as good as or better than most of its competitors. Paul referred members to an article on the MakeTechEasier.com website “Is Windows Defender good enough in 2020?”.

The MakeTechEasier article bases its findings on websites https://www.av-test.org/en/ and https://www.av-comparatives.org/, both of which rate antivirus software every month. The first site rates antivirus software in areas of protection, performance, and usability. Windows Defender ranked at or near the top in all categories. The second website looked at real-world testing based on 703 test cases. Along with Avira, Microsoft Defender was not compromised in all those 703 tests. The article concludes that Windows Defender is now much improved and a viable antivirus option in itself. Paul uses Microsoft Defender but admitted he runs Malwarebytes every 4 to 6 weeks for added peace of mind.

After a refreshment break, Stuart Bedford gave an informative presentation on “The Recycling Dilemma”. The catalyst for the presentation was a Yammer post stating that banana leaves should be used for food packaging due to their bio degradable properties. With a background in food packaging, Stuart debunked the above premise. The process is small scale, expensive and the amount of banana leaves available could never meet the demand. Other similar natural materials could be used instead of banana leaves but they have the same disadvantages and could never replace plastics in the near future.

Stuart believes we must prevent plastics from entering the environment. There’s nothing wrong with plastics, the problem is how they’re handled and allowed to get out into the environment. We all need to improve our use of plastics, as we cannot turn the clock back to the 1950s to a time when plastics almost didn’t exist.

Stuart maintains there’s nothing wrong with plastics but we must:

There are two significant problems Stuart sees in the plastics debate. Firstly caused by countries with little or no pollution control and plagued with corruption. Corruption causes a significant portion of the pollution problem. Secondly poorer communities whose people are just living to survive have no interest in pollution control. Their priority is what they have to eat the next day. This problem can only be solved by tackling poverty in these countries. To highlight these points Stuart showed a video of the world’s most polluted river, the Citarum River in Java. https://www.youtube.com/watch?v=AkSXB-lRAp0. The recent recycling crisis in Victoria created when China refused to take our waste was not entirely the fault of SKM recycling. Stuart believes the State Government and the 30 councils using SKM are partly to blame due to a lack of oversight and an “out of sight”, “out of mind” attitude. SKM didn’t recycle anything, they took the recycling in, bundled it up in containers and shipped it off to China. Once shipping was stopped, there were no processes in place to handle the waste. With 60% of recycling going into landfill, governments have proposed a “National Container Deposit Scheme”, with Victoria’s scheme to commence in 2023. Potential problems are the size of deposit containers needed to store cans and plastic bottles. Large containers are needed as cans and bottles cannot be collapsed before being deposited. Glass will need to be sorted and plastics will need to be cleaned thus increasing water usage. Stuart can also see the rise of “bin divers” raiding street bins to collect the 10 cents deposit. The 4 bin scheme was another option councils are looking at to help make recycling more viable by reducing sorting.

Members attending were asked whether paper coffee cups were better for the environment than foam cups. Most answered paper cups, but they were wrong. Due to the manufacturing process paper cups are almost impossible to recycle due to the waterproof layer needed to hold liquids. Paper cups are usually 2 layers, need bleached board, have a polythene liner, use ink and often use a plastic lid. Foam cups on the other hand are 90% air and can be recycled. The manufacturing process of paper cups is shown in the video https://www.youtube.com/watch?v=-mclkw3TZWU. The solution for coffee drinkers is to bring their own collapsible reusable coffee cups. The use of reusable cups is increasing. As most recycling goes to landfill, an increase in infrastructure is needed to solve the recycling dilemma.