Paul Woolard opened the August meeting with sad news of the sudden passing of member Andre Rigoni. Illness to another member resulted in a call for a permanent volunteer to assist with the mid break tea/coffee preparations. Paul then thanked Dave, Stuart and George for the many presentations they make at East and asked more members to consider giving presentations in the future.

The meeting then commenced with George Skarbek conducting his popular Q&A segment.

Q: I was given a “magnificent gaming keyboard” but I can’t get it to display a colon. The semi colon works, but the colon is the only key I’ve notices that doesn’t work. I need the colon when entering internet address so this error is becoming a problem.

A: I suspect the keyboard may be the cause. Even though the semi colon is on the same physical key and displays correctly, the keyboard could still be at fault. This is possible due to an error in the row or column decoders in the keyboard.
Audience suggestions:
– Possibly a key reassignment may solve this problem.
– Try another keyboard to see whether the cause is due to hardware or software.
– I had a similar problem with keys not displaying correctly. The error turned out to be due to software and not a hardware fault. My problem was solved by changing the keyboard to Swedish then back again to English, after which all faulty keys displayed correctly.

Q: This is a warning to members. Two acquaintances had the NBN connected recently and the installers seemed to pick the most inconvenient locations in the house to wire up their equipment. Therefore I suggest members keep a close eye on where the NBN box is installed. You can request the installation anywhere up to 30 metres from the house connection point so make sure you get the NBN box where you want it.

(Tech Ed: Regarding selecting an ‘inconvenient location’. Yes, you are fully entitled to nominate a location. NBN SHOULD take this into consideration. IMO, it should be a mutually convenient location, not necessarily one based on distance. A straight run of say 40 metres may be easier for the installer, than a 5 metre run, for instance. Be polite to the installer and put the kettle on and who knows!)

A: Yes, that’s good point. Don’t let the installers bluff you and insist on your NBN connection being where you want it not and what’s easiest for them to install. Once installed it becomes your expense to rewire if the equipment is in an inconvenient location.

NBN Fibre to the Premises connection

Q: This is another comment on the NBN. I’m an Optus customer and have had the NBN now for 3 months. I opted for the middle package of 50mbps download. I was only getting 30mbps down and 1.5 up. I’ve battled and haggled with Optus for those 3 months and finally I’m now getting what I paid for. Persistence finally won the day and I received a $50 credit to boot.

A: Well done. I also had a problem with the NBN and after the third attempt I went to the Telecommunications ombudsman. Hours later the problem was fixed. Keep that in mind that the ombudsman has a lot more clout than you or I have.

(Tech Ed: This is not necessarily true, as the TIO is somewhat restricted on what it can tell the NBN what to do, the RSP yes, but not NBN. I have even been told by customers that ‘The man from NBN was very rude and I never want to speak to them again’! They are NOT the ultimate answer.) 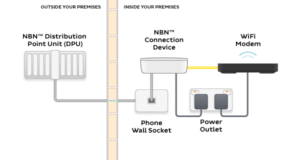 Q: Recently a business I know had NBN installed with iinet. They are happy with the service and the 50mbps download and 20mbps upload speeds they are getting. The problem was that it took Telstra 4 to 5 days to transfer the business phone number over.

(Tech Ed: Generally speaking, if the phone line is important and you wish to keep the risk of delays on transfer down, then the most reliable way, is to stay with the same RSP.)

A: I’ve heard stories like that as well. I’ve no idea why it takes so long, it should be a matter of someone sitting at a keyboard and changing it with a few clicks.

(Tech Ed: On the face of it, this is true. However, there is no agreed process between the multitude of RSP’s AND IMPORTANTLY, it needs to be co-ordinated with the NBN.

For mobile phones, there is an agreed process in place (government regulation) and there is only 3 players to co-ordinate and so much easier. There are many RSP’s and some types of port are much more difficult (usually business type services). What it amounts to is ‘BEST EFFORT’ or not! Most RSP’s have a queue to work through and your turn will come EVENTUALLY!)

Q: I’m connected to the NBN at home and recently installed a new telephone system. A blinking light on the answering machine keeps telling me there’s a message when there is none. I’ve spoken to Uniden and they told me they get a lot of complaints about that issue. Uniden claim the cause is from Telstra and the NBN. It’s not a significant problem as a blue light also appears when there is an actual message. Have you heard of this problem before?

A: I’ve got a 5 station phone setup and not experienced anything like that.
Audience member: I’m with Optus and I’ve had the same thing. My cordless phone says there’s a message and I just let it blink away. It’s been blinking away for 2 years now.

(Tech Ed: I have a Uniden cordless phone and haven’t experienced that problem. I suspect the issue is a setting in the modem, whether that setting is accessible to the user, is another matter. Personally, I turn off as many phone options as practical and use any functions (such as answering machine etc) and use the ones built into the phone.

The blue flashing light may be telling you that there is something on the RSP’s system, but you’re actually checking the messages, within the answering machine, or vice versa.

In that regard Uniden are correct, their phones aren’t faulty, it’s the confusing aspect, on what you are activating.)

(Tech Ed: On Yammer we have an ‘NBN Questions & Comments’ Group.

I would highly recommend, that MelbPC members go to this group and feel free to ask SPECIFIC questions, about their NBN connections. General NBN statements by others, while well meaning, can give the wrong impression, due to the many variables.)

Following Q&A Paul Woolard outlined some of his favourite websites. Most are technically oriented but one he uses for current issues and news is www.insidestory.org.au. Inside story is an independent Australian website featuring national and international news, current affairs, book reviews and culture.  Articles are from leading writers and researchers through the support of Swinburne University of Technology and the University of South Australia. Articles display the number of words in each, with most articles around the 2000 word mark.

A recent article Paul found of particular interest was “Rolling Thunder”, an article on the atomic tests in outback South Australia in the 1950’s and 60’s. Although this article is slightly longer than most, Paul recommends it to members.

Technical sites Paul regularly refers to and displayed during his presentation were:

Additional websites Paul uses and recommends can be found in the July 2018 East SIG report.

George Skarbek followed with a short talk on hard drive reliability. A study of 108,000 hard drives from various server locations were evaluated over the last 3 month period. Only drives with 60 or more representative samples were included in the study’s findings. George displayed a webpage from the study which listed the various drives, the number of samples and their annualised failure rate. It’s the annualised failure rate of a hard drive that is used to gauge its reliability. Toshiba had the lowest failure rate, followed by HGST (Western Digital) then Seagate the least reliable. Toshiba has held the top spot in these studies for the last 2 years or more. George’s conclusion, buy Toshiba.

After a break Dave Botherway spoke about “Cloud Services for MelbPC Members”. All MelbPC members have an ID in the format of usename@melbpc.org.au. Besides being used to access Members-Only areas of our website, it is also an email address with full mailbox facilities provided by Microsoft – so is actually a Microsoft ID.

Email can be accessed as Web Mail using a browser, or saved and processed on the PC using a Client email program such as Windows Mail (part of Windows 10), Outlook (within Office365), Eudora, Thunderbird, Mailspring etc.

Web Mail has the advantage that your email can be accessed and sent anywhere, using multiple devices such as Smart phones, tablets and PCs. It’s arguably more secure because all emails are stored offsite in the cloud. However you need to be online to access your mail. A Client email program such as Thunderbird is best for historical storage, but still requires the user to be online to send and receive email.

Dave noted that many members have been confused by Microsoft’s naming of its email programs when referring to MS Outlook. Outlook Express has been superseded by Windows Mail and is part of the Windows operating system. It no longer carries the name Outlook to avoid previous confusion. Microsoft Outlook is a much more capable program and is part of the Office suite.

Whereas MelbPC membership includes the cloud version of Office-365, a desktop version is also available to MelbPC members upon request. Annual subscriptions for Home, Personal and Business versions of Office 2019 are available at OfficeWorks at a significantly higher price than MelbPC members pay. Dave went on to detail some of the programs in the Office 365 suite available to members. A full list of these programs is shown in the graphic above.

Alternatively, one-time purchase is possible for versions such as Office 2019 Home&Student, Office 2019 Home&Business and Office 2019 Business Pro. Some examples of OfficeWorks current pricing (August 2019) is shown in the graphic below.

Available as part of Office 365 is OneDrive. OneDrive is a cloud storage service from Microsoft and is part of the Windows operating system. OneDrive allows you to store important files in cloud storage with the ability to access those files anywhere on any device. A special OneDrive folder is created on your hard drive but files shown in the folder are stored in the cloud. i.e. it works just like a traditional hard drive, but it’s on the internet. Dave noted that if you haven’t used OneDrive for a certain period, access to OneDrive is removed. 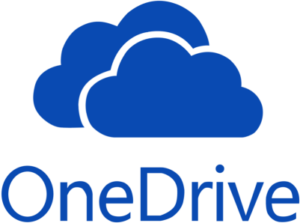 Portions of this report on Dave’s presentation have been taken from the Beast SIG website which covered a similar topic.