Notes from the February 2017 Meeting

Nick Vespo’s Linux News consisted of a single item: A Conversation with Linus Torvalds. The item was longer than the usual time allotted to Linux News, but all present were happy to see the full interview. Linus was relaxed during the interview, and started by talking of his love for skiing and surfing.

Then the topic shifted to Linux and his involvement, starting in his university days. Linux has now been around for twenty-five years: it was his brain-child, but these days his involvement is with the kernel. As the ultimate boss of the kernel, the buck stops with Linus. However, development involves a large number of people scattered across the globe, and a major question was “how do they work as a team?”. Linus said that it is mainly a question of trust, since each developer needs to trust the people that they work with, both at the personal and the work levels, even though they may have never met in person. New team members come to learn to trust and be trusted as they work with the established team members.

A somewhat-related topic was the release cycle. In the early years of Linux, each kernel release was targeted to contain much additional or changed function. This meant a long period of development, and time, and difficulty for the customers in understanding and implementing a release. Some ten years ago, Linus decided to aim for a two-month release cycle, with modest change in each release. This has been working well for both developers and customers, even though the release cycle has not yet come down to quite the hoped-for two month level.

Another major development that Linus started was GIT. It is now the base for hundreds of thousands of software projects. He pointed out that he only administered GIT for the first few months of its existence, and paid tribute to the current project leader, who has carried the load ever since. All-in-all, an amiable and informative session that avoided being very technical.

The Open Forum session followed, led by David Hatton. First, there was a short discussion on password managers. It was generally agreed that a password manager is pretty much essential in the current environment. Keepass is a frequently used password manager for Linux. It is multi-platform, and can be used on various platforms without change as long as the version of Keepass is the same. It has the neat feature of generating passwords for the user and then remembering the passwords, saving time and effort.

A combined question and information item was about software called Mosquitto running on a Raspberry Pi. The software will not run as a Service, but can and will run as a Daemon. No suggestions from the floor as to how to make it run as a service. Documentation is at mosquitto.org.

Q: Why do some URLs only respond to Ctrl-Click? A simple click will not direct the user to the target web site. A: In a document, Ctrl-Click is needed. A click allows the user to edit the URL.

The social break involved coffee, tea, biscuits and lots of conversation. As usual! After the break, our Convenor, David Hatton gave one of his popular Random Bytes sessions.

The first topic was the latest version of LibreOffice (LO) – Version 5.3, with an emphasis on the new, experimental portions. To run LO 5.3, a recent version of a Linux distribution is needed. David chose the latest Slackware version as the platform, partly because it was to be a later topic in the session and also because the Slackware install does not have a default Office suite.

The toolbars in LO 5.3 are numerous and have many options. If all toolbars were displayed (about 30), there would be little or no room on screen for a space to actually do work. So inventive ways of displaying active toolbars are used. One option is to show the toolbars as a single Bar with a double arrow at the right hand side of the screen to allow the user to see toolbar options not already shown. A different option is a tabbed display, showing the toolbar of the selected tab, with others hidden until selected. A third option is to show the toolbars as a side panel. The Notebook toolbar option looks quite similar to the Microsoft Office version. One point noted about LO was that an understanding of Styles can be important. For instance, Styles are used to allow creation of a document’s Table of Contents.

The second topic was about the install process for Slackware. The install is quite different to other Linux distributions in that it does not have a graphical user interface and offers a much more granular approach to which items to install. David installed it into a virtual machine from a previously downloaded .iso file. The person installing Slackware should have a reasonable prior knowledge of Linux and be comfortable with the command line if he/she is to be successful. An early surprise is that Slackware does not use the GRUB program by default, but instead uses the earler LILO – the Linux Loader, which may not always guarantee success when booting. 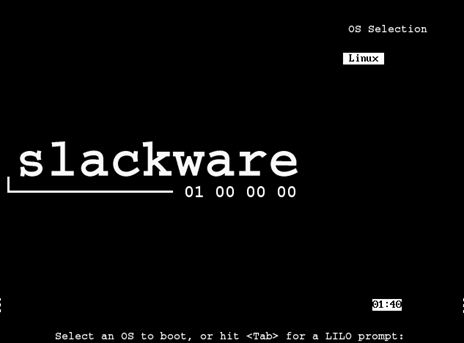 A screenshot  of the initial boot screen on a fresh install of Slackware.

For a good introduction to LILO and GRUB see http://www.ibm.com/developerworks/library/l-bootload/index.html – NB: this article was written in 2005 and refers to versions of LILO and GRUB current at that time.

The text-based lists of the installer are selected/de-selected via check boxes against each item. There are many groups of items to make selections for, and when complete the install proceeds pretty much without further interruption. The art is in knowing which items to select for install. Once the install completed, David was able to boot a newly-minted Slackware system, ready for action.

Another system to add to our collection, and a very good evening’s meeting.