Notes from the November 2018 Meeting

Linux News started with an item about the IBM’s $34 billion acquisition of Red Hat.  It was thought to be a very high price for Red Hat’s business as a cloud services integrator, with revenues of $720 Million and some 12,000 employees. But it does make IBM the largest hybrid cloud provider.

Open source software largely runs the Internet, and the cloud services market is expanding at a high rate. Currently about 10 per cent of enterprises are committed to cloud services, and this is expected to reach 80 per cent by 2025, so presumably IBM is aiming for a good share of the expansion. In terms of current market share, Amazon is by far the largest cloud services provider, with Microsoft a distant second, and then Google, with IBM currently having a very small share of the total market.

The other item related to foldable phones. It seems that almost all phone manufacturers are working on foldable phones. Early to the market was a Chinese maker – Royole – who produce a device with a screen that folds around the outside of the phone. The phone is only available for the Chinese market or for developers in the United States.

ZTE also produces a “foldable”, although some reviewers describe it as more of a dual display or “hinged” smartphone. It’s an Android 7 (“Nougat”) phone with two displays, capable of running two apps side by side. The “full screen” mode gives you a 6.5-inch display with a noticeable split in the middle.

Samsung’s foldable has a different style: closed it shows a conventional screen – open, it shows a double screen which is tablet-style, but with the possibility of displaying two apps on the screen in parallel. This may need extensive software modifications to support the expanded operational modes.

David Hatton started the Open Forum discussions by confirming that we had secured the use of the meeting room at Watsonia Library for our meetings in 2019. There is quite heavy use of the meeting room, and we appreciate the ability to use the facilities on a regular basis – 2018 has been our twelfth year at Watsonia Library. David also thanked a number of members who have contributed much to the activities of the SIG.

The Open Forum continued discussion of cloud services and raised the issues of cloud backup and restore. Cloud service providers claim that their services are fully backed up and recoverable, but it was pointed out that the recovery takes place at the service level. That may not mean that an individual’s data is fully protected.

The consensus was that a user should back up their data locally as well as having the cloud backup. This is particularly be the case for online email services. If the cloud service version of a user’s emails is lost or corrupted, it could lead to major problems for an unlucky user who has no local backup. There was a brief discussion on the Wayback machine as a backup mechanism.

The latest version of Firefox (v 63) needs recent processor features, and may not work on older machines not having the features. One member has experienced a problem with Ubuntu 18.04 producing a bug report on every boot but no-one else reported a similar problem. It was suggested that the issue might relate to the use of Intel integrated graphics.

There were comments on the lack of USB ports on new notebook machines. Some have only a single USB 3 port and only one USB 2 port. This can cause the user to resort to a hub for connecting extra devices. A member has found that one port on a USB 3 hub did not function, whereas another did. This was the case whether the hub was powered or un-powered.

As usual, the social break was enlivened with much discussion, some of it related to the issue of cloud vs local backup.

While Qemu is best and most flexible running from the command line, a basic i386 emulator can be set up without much hassle. There are also utilities to easily create virtual disks for use with Qemu.  David used Linux Mint as the basis for the demonstration of running FreeDos in a Qemu environment.

During the setup, a list was shown of possible architectures/operating systems emulated via Qemu.  It was extensive, and contained some surprises, such as MIPS, SPARC and System 390.  David pointed out that the emulation of FreeDos on the Raspberry Pi would operate in exactly the same way as was being demonstrated on a Linux platform.

David first used the qemu-img utility to create a virtual disk for the use of FreeDos as the C: drive.  The subsequent install to the virtual disk from a downloaded FreeDos installation .iso file followed the standard install procedure.  David noted that this installation can take around 20 minutes on a Raspberry Pi as the SD cards used are significantly slower than a normal hard disk drive – it was much faster on the demonstration laptop. 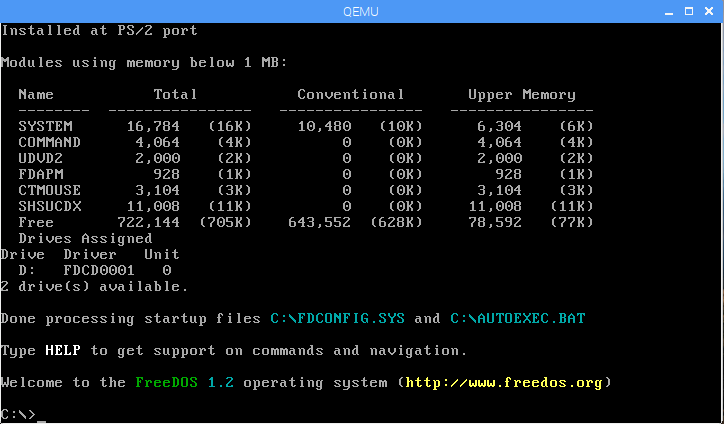 It is also possible to install from simulated floppy disks, and the once-familiar process of exchanging floppy disks during installation is faithfully reproduced, in all its glory (or maybe ‘gory’). Then FreeDos was run, and we were reminded of the joys of running Dos from long ago, complete with the C: prompt and all the commands that were once familiar.

The version of Qemu on the raspberry Pi can also run graphical demos, like that shown below from a Maple demonstration floppy disk. 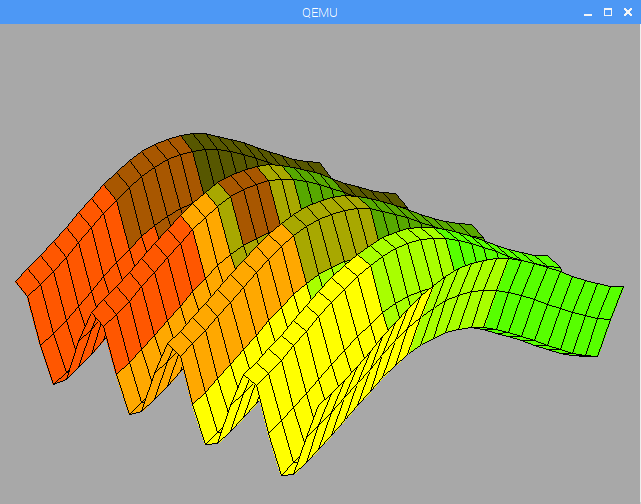 This being the last meeting of the group for 2018, the evening finished with attendees getting Christmas best wishes, and the final applause showed how much the audience appreciated David Hatton’s efforts.

Some links that may be of interest are …

FreeDos on a Raspberry Pi –