Notes from the September 2018 Meeting

Nick Vespo was unable to join us for the meeting so David Hatton started proceedings with a description of two online Linux magazines. The first, Full Circle, provides a weekly newscast and a monthly magazine. Both are downloadable in PDF format, and there is no charge, although they do ask for contributions from readers.

David looked at the latest offerings and a special edition titled “Command & Conquer” which gives a good explanation of the command line and the commands available through that interface. The image below shows the first page introducing Command and Conquer. The magazine is Ubuntu-oriented, although they claim to have no relationship to Canonical (the developers of Ubuntu).

Continuing with the Ubuntu theme, the second online magazine examined was “OMG Ubuntu”. This is a more generally Linux-related magazine. with separate news-worthy items. Those that David looked at briefly included: The Best New Features in Gnome 3.30; Wobbly Windows Are Making a Comeback; and Slimbook Kymera Aqua – a powerful Linux PC.

Problems with UEFI when trying to dual boot Windows 10 and Linux – some folks have removed Windows and used legacy BIOS for booting.

The saga of trying to find a complete backup/restore facility that is durable for five years and more continues. Many suggested solutions fail after a while because the hardware or software used is not available or supported in a long enough timeframe. The current suggested solution is Clonezilla.

Problems have been experienced with Virtual Box under Windows 10 being incompatible with Ubuntu 18.04. At least one member has been able to install and use Peppermint 9 in that environment by setting the ‘No Mode Set’ flag at boot time.

There were several lively discussions during the social break.

The main session of the evening was given by David Hatton, and the topic was the Peppermint 9 distribution. This distribution is based on the Ubuntu libraries, and uses some elements of the Mint distribution.

The minimum requirements described in the online guide seem a touch optimistic. For example, 7GB of disk is recommended, but in the real world it may need up to 12GB if Libre Office is added after install. Libre Office itself needs only about 1GB. A user can use all the applications shown in the menus, but for many applications the menu editor failed to work – it would appear that this is a rare case of needing to use the command line to alter menu related files to obtain a different menu layout.

One exception is changing the number of workspaces, and this is allowed in the appropriate sub-menu. The distribution uses a mixture of local and cloud-based services, with – for example – Gmail being used as the default email client instead of the usual thunderbird email client. The file manager is Nemo, a very customisable and capable program. The default browser program is Firefox, and Peppermint can adapt the browser window for Site-Specific Browsers (SSBs) to keep the window as simple as possible, with no browser menus, toolbars or other options.

The SSB can appear in menus for access to the particular site’s web pages or web apps. This feature is not unique to Peppermint, but is not commonly available in other Linux distributions or operating systems. Peppermint provides a tool called ICE to create SSBs. The image below shows the dialogue for the creation of an SSB which will appear in the Internet menu once created. 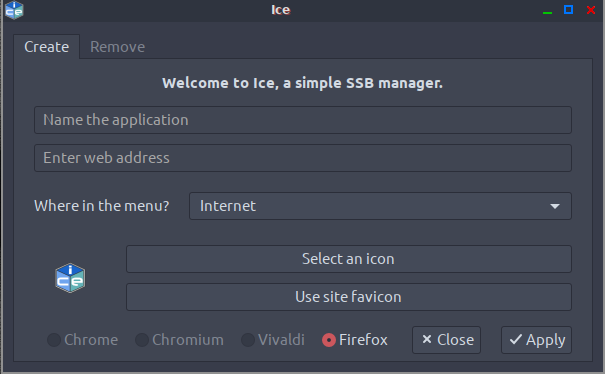 Using the ICE tool to create a site-specific browser (SSB)

Peppermint includes a number of example SSBs by default, including some popular applications such as Google Drive and games such as Entanglement. The ICE tool can be used to remove any unwanted SSB’s.

The free online version of Microsoft Office is available via the menus, but a Microsoft sign-on is required for its use. It is another example of the inclusion of cloud-based facilities in this Linux distribution.

The Peppermint 9 distribution largely fulfils its claims of being fast, stable and lightweight. It is built on the base of Ubuntu 18.04 long term support, and should be “good to go” for several years.