A My F7 key increases the brightness of the screen. You’ll find the function keys F1 to F12 vary from manufacturer to manufacture and sometimes between models. Otherwise, I can’t help with your F7 mute key.

A You definitely can use hyperlinks in a PowerPoint presentation. Copying and pasting the URL from the YouTube video is also correct, so you appear to have done all the right things.
[Dave Botherway] I’ve used hyperlinks in PowerPoint presentations numerous times without any problems. What I do to insert a hyperlink is to move to the page where I want the hyperlink. From the Insert tab, I select the Link icon on the ribbon bar. In the dialogue box that opens, I enter a description for the hyperlink and paste the URL of the YouTube video in the address box. This seems to work okay but you need to be running the presentation for the hyperlink to work. [Dave Botherway] Another thing I do is to download the video to my PC. I then run the video from my PC when presenting it. That way I’m not dependent on downloading the video to my PC while broadcasting it out again via Zoom. The more I can broadcast from the desktop the better. You’ll therefore need to find some software that will allow you to download the video from YouTube. “Download Helper” and “4K Video Downloader” were 2 programs mentioned by audience members that they found work for them.

The future format of EAST SIG Meetings for the remainder of 2021 was the next item discussed. The session was run by Dave Botherway, who is one of six members who form the East SIG committee. The committee is keen to restart face-to-face meetings as they see a lot of value in the informal social interaction that occurs at those meetings. Members were advised they would be presented with meeting options and conditions, following which a poll will be taken to determine their preference.

The alternative to face-to-face meetings was to hold meetings via Zoom. Dave indicated it was too early to determine whether hybrid meetings would be practical, due mainly to audio quality issues, so this option was not included. He also noted that if Zoom meetings were to replace face-to-face meetings, there is a risk that East SIG would lose the booking for the Eley Park hall. If the preference of members was for Zoom meetings, the committee is considering allowing extra time for ad-hoc social interaction. “Breakout rooms” are a possible option to create smaller groups of 5 or 6 people. Dave plans to include a presentation on Zoom “Breakout rooms” next month.

A Zoom poll comprising 2 options was then run to gauge members meeting preferences. The outcome was approximately two-thirds favoured Zoom and one-third face-to-face meetings. Comments by some of those supporting Zoom were that they would not be able to attend otherwise due to distance, having to travel at night in winter, and some for COVID-19 health concerns.

Following on from Dave, Trevor Hudson presented a video he’d prepared titled “How to enable Audio Description on TV”. Trevor researched this topic to assist his elderly father who is visually impaired. Audio description is available on some SBS, ABC, and Netflix programs and works with most common brands of smart TV’s.

Trevor’s video along with “How to enable Audio Description on Netflix” is available on YouTube by searching the video’s title or Trevor’s pseudonym HX7V.

After a short break Neil Muller gave a presentation on “Simple TAB Groups” and posed the question is this a better bookmark manager? Simple Tab Groups is a Firefox add-on that creates and modifies tab groups. It’s a very easy way to declutter your browser tab bar and organise your tabs to make webpages easier to find. It does much more than just combining tabs into groups which Neil demonstrated during the presentation.

When browsing the internet, Neil found it more convenient to leave tabs open, rather than creating bookmarks and closing the tabs. After a while, tabs had accumulated and the websites he needed to refer back to were becoming harder and harder to find. After searching the internet for a solution, Neil discovered Simple Tab Groups and gave it a try. It’s now become one of Neil’s must-have apps on his computer. 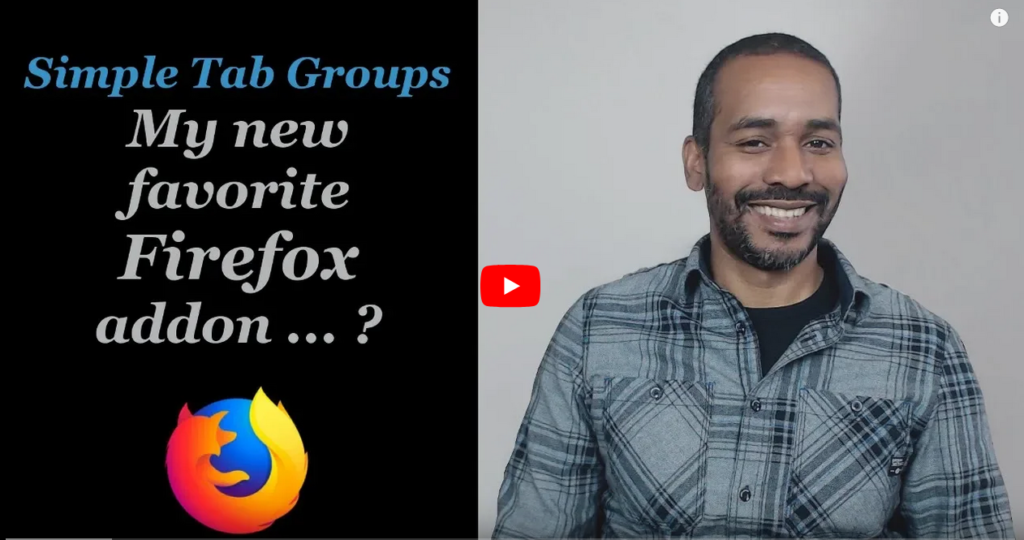 The Percy Jules video assumes an installation of Simple Tab Groups with no previous tabs open. However, many users like Neil will already have many tabs open. Neil then demonstrated how those users with tabs already open would run Simple Tab Groups for the first time. The initial step is to list all the tab group headings you think you’ll need. Next, select the Simple Tab Groups toolbar icon and click “Create new group” (refer Figure 3). This will create your first group which will contain all the tabs on the tab bar. From here you create new tab groups using the topic headings you listed earlier. From the toolbar icon select “Manage Groups” and from the window that opens, tabs are dragged from the first group into their appropriate named groups.

An alternate method of moving tabs into groups is to right-click on a tab and select “Move tab to group”. This adds the tab to one of the newly created groups and removes it from the initial (current) group and it disappears from view. Neil found this method more time-consuming for the initial sort (more clicks), but the best option later when you find a tab in the wrong group and wish to move it to another group. (refer to Figure 4) After demonstrating how to initially move tabs into their correct Tab Groups, Neil looked at some of the most useful features of Simple Tab Groups and how to access them.

From the Firefox toolbar, select the Simple Tab Groups icon to open the toolbar menu. (refer to Figure 5). This menu offers 3 options, the first is to select which Tab Groups to display on the Firefox tab bar. Selecting one of the many Tab Groups will then display all tabs in that group and hide all other groups from view. A feature of Simple Tab Groups is tabs are active (open) or inactive (closed). Therefore, when you load a tab group, only those tabs accessed in the current session will be active. All other tabs in that group will remain inactive until you click on the tab to open it.

The remaining 2 options in the Toolbar menu allow you to “Create a new group” or “Manage groups”. Selecting the Simple Tab Groups icon on the Firefox toolbar opens the toolbar menu. The first item in the menu displays all the Tab Groups you’ve created. There is a wealth of information available from this section of the menu, the most important I’ve listed below including 2 screenshots used by Neil in his presentation. Toolbar Menu – Manage groups:
There are 2 options available under this menu item.

After a live demonstration of Simple Tab Groups, Neil briefly looked at how other browsers are implementing tab groupings. Chromium based browsers, namely Google Chrome, Opera and Microsoft Edge are currently introducing tab grouping into their browsers. As yet Firefox has not implemented this feature into their browser, however, Neil felt Firefox couldn’t improve on Simple Tab Groups.

The tab grouping feature in the Opera browser is called Workspaces and impressed Neil more than the other Chromium based browsers he investigated. Workspaces is accessed via Opera’s sidebar and is simple and easy to use. Much like Simple Tab Groups, when you select a tab group from the sidebar, only those tabs in that group are displayed on the tab bar.