How To Install Linux

Every few months in PC Update, reviews of different Linux distributions are featured, and other aspects of the operating system are discussed as well. So you might have found yourself interested in trying it out but been unsure of how to proceed. This interest in trying out Linux might have increased since the release in recent months of Windows 11, and the fact it will drop support for still relatively new hardware. So here is a Windows user’s guide to switching to Linux. It should provide you with the major steps involved in getting your computer prepared for Linux and getting the operating system installed. As you ponder what to do over January, this might be something you want to have a go at.

Step One: Pick a Distribution

One of the daunting aspects of installing Linux for Windows users, is that there isn’t just a handful of editions to choose from for installation as there is with Windows, but hundreds of distributions. So the best way to make sense of what all these distributions are and which one is the most appropriate for you is by heading to the Distrowatch website. Distrowatch provides overviews and reviews of every Linux distribution in existence and gives you an idea of which ones are the most popular with other users through their ranking system. Picking one of the most popular distributions is a safe way to go because there will be plenty of support online available from other users if you have any trouble. The best distribution for new users coming from Windows is Linux Mint – it uses an interface that is very similar to Windows 7 and has been designed to be easy to install and easy to use.

Once you have chosen the distribution you want to try (and as I will explain below, trying a distribution doesn’t lock you into that distribution) you need to go to its website and download its installation ISO file. The ISO file is a disk image that can be burned to either a DVD or a USB stick. Generally, it will be between 1-2 gigabytes in size, so depending on the speed of your Internet connection, it could take around 20 to 40 minutes to download.

Once you have the installation ISO file, you need to transfer it to either a DVD or USB stick so that your computer can boot from it. Unless you have a very old computer that won’t boot from USB stick, then USB stick is the recommended way to go here as it is much faster to boot from and install from. To prepare a USB stick, you need to install a special utility. The one that is easiest to use for the task of preparing a Linux USB installer is Balena Etcher. 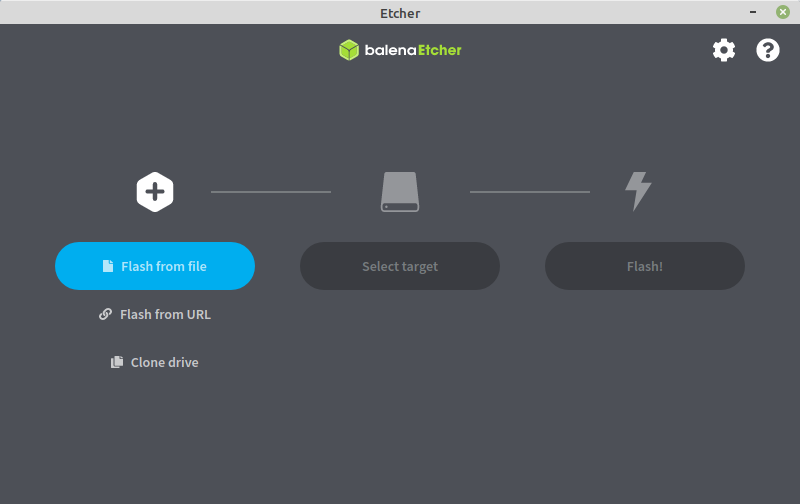 Once you have Etcher downloaded and open, you are presented with the interface pictured above. To make your Linux USB installer you simply press ‘Flash from file’ and choose the ISO file you’ve downloaded. Then you press ‘Select target’ and choose the USB drive you want to use (which will be erased and overwritten) and then ‘Flash!’ to start the writing process. The whole procedure should take less than ten minutes and then you’ll have your Linux USB installer ready to use.

If you’re trying Linux for the first time, then I’d recommend you install it on a secondary or old computer that isn’t your ‘daily driver’ so you can ease yourself into using it. This will be less stressful than migrating straight from your main Windows PC and having to get up to speed on everything Linux just to get your daily computing tasks done.

But if you are migrating directly from Windows then there are two ways to go about it. The first is to dual boot Linux side by side with Windows. This involves freeing up space on your Windows drive and then making a new partition that you can install Linux on. If you are looking to do this, then a quick Google will give you the steps that are involved. Alternatively, you can install a new additional solid-state drive or hard drive in your PC and install Linux on that.

The second way to migrate directly from Windows is to back up your Users directory (which is found in C:\Users\<yourname>. Copy all these folders (such as Desktop, Documents, Photos etc) to an external drive so you can transfer them back when you’ve installed Linux. You might also want to specifically ensure things like your Mozilla Thunderbird user profile is backed up, and then this can be imported again when you’ve installed Linux. Also ensure you export your bookmarks from your web browser to a HTML file and save it to the external drive so you can import these again.

Now that you’ve done all of the above, you’re ready to shut down Windows and boot into Linux from your Linux installer USB. To do this firstly ensure it’s inserted in one of the USB ports on your computer. Secondly when you restart your computer, you may need to go into BIOS settings and alter a few things. One thing you may need to do is to find the option for Secure Boot and turn this off, as many Linux distributions do not support this. The second you might need to do is alter the order your devices boot in and put USB as the first device to try. This will ensure that your Linux installer USB will boot.

After this you can restart again and let your USB installer boot. It should take you into what’s known as a live installation of your chosen Linux installation. Once you get here, you have a fully working version of Linux to play with. You can connect to your WiFi network and then use the included web browser (usually Firefox) to go online. There will also often be an included version of LibreOffice and other tools and utilities that you can try out.

If you like what you see and want to make Linux a permanent feature on your computer, then there will be a link on the desktop named ‘Install <name of Linux distribution>’ that you can click to start the installation process. If you don’t like what you see, then you can either go back to step two and choose a different Linux distribution or you can abandon the exercise and go back to Windows.

Installing Linux isn’t usually much harder than installing Windows from scratch, so if you’ve ever done that, you should feel comfortable undertaking this process. You need to pick your language and currency format, your keyboard (it’s normally US if your laptop was purchased in Australia), set your time zone, choose where to install Linux (whether you are erasing what’s on the drive or installing in a partition beside what is already there) and then provide personal details to setup a user account and password. After you have been through all these steps, then you just need to wait while everything is copied and setup for you. The process normally doesn’t take much more than ten minutes. Once everything is finished you will be prompted to restart (and prompted to remove the Linux installer USB).

If all went well in the previous step, you should now be rebooted into your Linux distribution. You’ll simply need to login with the password that you set to start using everything.

If you setup Linux to dual boot with Windows, then when you first boot up your computer you will see a menu (usually known as GRUB) where you can choose between Linux and Windows before either one boots.

That’s it. Have fun and if you do follow this guide to install Linux, feel free to drop me an email to let me know how you went. And if you need more specific help with any part of the process then the Linux Chat group on Yammer is the first place you should head.