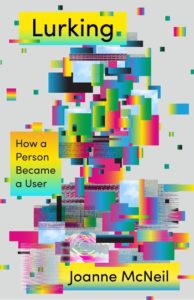 Lurking – how a person became a user

This may not be of interest to Melb PC members. McNeil traces the development of the Internet from the 1990s to the present with an emphasis on social media. However, it is very much the story of her own experience; a white, apparently well-off, single American woman. When she finds a used airline boarding pass in a second-hand book, she wonders how far she should investigate the name on the pass, even wondering whether she should look at Instagram posts of the holiday the other woman was on. There are some moderately interesting stories of early social media with some New Yorkers able to follow the Twin Towers attack on a local Bulletin Board. McNeil describes her progression from AOL through Friendster and MySpace, and how she thought her first iPhone was wonderful. Skimming through the book reveals that McNeil becomes aware of the interests of others of different gender, race and income and understands that Twitter and Facebook do not necessarily have the interests of their users at heart. It may be a harsh judgement, but Lurking is probably not worth reading.