Q: I have a problem with printing. I’ve done all the maintenance tasks on the printer and the printers test page prints perfectly. When I open and attempt to print a pdf file from Adobe Acrobat, I only get the top half of every line of text. The print preview does not show up any problems. Any graphics are not affected and print in full. I’ve uninstalled and reinstalled Acrobat but still have the same problem. Do you have any suggestions that could help?

A: I would try a different Pdf viewer and see if you can print from that. George then asked the audience if anyone has encountered similar behaviour. One member had a similar problem when one line covered another, both on the screen and on the print. He was often able to correct this by altering the magnification of the screen. Another member suggested before doing a print you look at print preview and fiddle with the size of the file on the paper. The consensus from the audience was to try another pdf viewer such as Foxit.
[Reply from questioner] As images are printing correctly, I’ve taken a screen copy of the pdf and plan to see whether that image will print correctly.
[George] If you need to print large pdf files, there are many free sites on the web that you can upload your pdf to and it will be converted to Word. By and large they do a very good to excellent job. Some have a limit to the size of the original pdf file.

Q: I have a problem with photoshop. When I try to do anything, I get a message “Can’t repeat your request due to a program error”. I’ve uninstalled and reinstalled Photoshop but that didn’t solve the problem. A Google search shows others have this same problem but no suggestions worked. The problem only occurred a few days ago when I updated photoshop.

A: The cause is most likely due to the update. I get Photoshop updates almost weekly, so I’d wait a few days in the hope others are experiencing the same problem and Adobe will send out a new update to correct the problem.
[John Hall] You could try using System Restore to roll back pre the update, given the problem only occurred a few days ago.

Q: Given that Adobe Flash is no longer supported and is being removed from our computers, what programs use Flash, and what will we expect to see malfunction? What will be the effect of not having Flash anymore?

A: Flash is no longer supported and by uninstalling it you’ll notice no difference whatsoever. Flash was introduced a very long time ago [by Macromedia] for rendering animations in web browsers. Since then, HTML code and browser functionality has evolved with many new features which have made Flash obsolete.
[Note: Up until the last year, many online photobook creation websites used Flash. These sites are now using HTML instead]

Q: Is Flash the same as Java? I got rid of Java and I’ve noticed no difference.

A: Java is different from Flash and it’s still being used fairly extensively. Some older programs may still use Java but if you’ve noticed no difference then you don’t have a problem. Java is still used in a lot of embedded devices but on computers it’s been phased out to a large extent, because it still has vulnerabilities. Java is basically an interpretive compiler.

Dave Botherway followed with his ongoing series on “Making more use of Zoom”, this time using remote control. When screen sharing in Zoom, the person sharing their screen has an extra icon on their tool bar called “Remote Control”.

When the “Remote Control” icon is selected on the persons screen that is being shared, the following options shown in Figure 3 are available:

Alternatively, other participants can request control of the screen being shared.

In the example below, participant Bob is currently viewing Dave’s shared screen. Bob wishes to take “Remote Control” of Dave’s screen.  To do this he selects “View Options” then clicks “Request Remote Control”.  When Bob clicks “Request Remote Control” a window opens. Bob then confirms he wants to take remote control of Dave’s screen by selecting “Request”.  Dave will then see a window open on his screen that Bob wants to take control, and he accepts this request by clicking “Approved”.  Bob can now manipulate Dave’s mouse and take control of the screen. At the conclusion of the presentation, Dave demonstrated remote control by using the mouse to open a and type text into a program on a screen being shared by another. An alternative to Zoom “Remote Control” is Microsoft “Quick Assist”. This will be a topic for a presentation at next month’s meeting.

Following Dave’s presentation, Trevor Hudson played 2 videos he’s uploaded to YouTube. The first was the latest of a series of Trevor’s magic tricks, this one titled “Trevor’s Magic Moving Coin”. This video can be found at  https://www.youtube.com/watch?v=OFoQ59zF730 . In the comments section below the YouTube video, is a list of Trevor’s previous magic videos.

Trevor’s second video was titled “How to Convert HEIC to JPG”. HEIC (High Efficiency Image Container) is a new file format for saving digital photographs. Images saved in HEIC have smaller files sizes and can have higher image quality than JPEG images. The major benefit of HEIC over JPG’s, is that the smaller file size of HEIC allows more images to be stored on a camera’s memory card or a phones internal memory.

HEIC is a relatively new image format, so not all current programs are able to view or read HEIC images. As a consequence, it is necessary to convert to the more common JPG format if you wish to edit an HEIC image. To view HEIC images in Windows 10, a free “HEIC Image Extension” is available from the Microsoft Store. After installing this add-on, clicking on an HEIC image opens that image in the Windows Photos app. Trevor notes that this extension allows you to view, but not convert the HEIC images to other formats.

In addition to installing the Microsoft add-on, Trevor suggests downloading the “iMazing HEIC Converter” from https://imazing.com/heic/download. This program converts HEIC image files to JPG at varying image qualities or to PNG format. Trevor then demonstrated the use of this program by converting single and multiple HEIC images to PNG and JPG. This is done by dragging the HEIC image file from File Explorer into the “iMazing HEIC Converter”.  Trevor’s video can be viewed on YouTube at https://www.youtube.com/watch?v=cH_AgsStrwk. Figure 6 – Before and After dragging files into “iMazing HEIC Converter”

Questions and comments from audience members followed Trevor’s presentation. It was mentioned that the latest versions of Faststone Viewer, Irfanview and GIMP will open and convert HEIC images. When the Microsoft HEIF extension is installed XnView can view HEIC images but not convert them to JPG. Both new Apple iPhones and Google Pixel phones save images in HEIC, while Samsung phones currently don’t.

Over the last two months, Dave Botherway has run Zoom polls to help determine the future format of East SIG Meetings. Previous polls showed there was an even split between those who preferred Zoom meetings to those who favour face to face meetings. Since the last poll, John Swale has been testing hybrid meeting at both Wadham House and at Heidelberg for the North East SIG. Although in the early-stage of testing, hybrid meetings appear a distinct possibility at venues this year other than Moorabbin. A new 2 questions poll which including an hybrid option was taken. Results were:

Prior to a break in proceedings, Dave Botherway summarised the presentation he gave last month on Zoom Breakout Rooms. Dave then opened Breakout Rooms to audience members who had 15 minutes to attend one of four breakout rooms.

The main session of the night was George Skarbek demonstrating a set of free utilities from Microsoft called “PowerToys”. “PowerToys” are designed for Windows power users to add new features that maximise productivity in Windows. They have been designed by MS Windows and Office programmers and are available for Windows XP, Windows 95 and Windows 10. At the time of writing the current version for Windows 10 is 0.35.0.

George then listed the various utilities within PowerToys and demonstrated those he finds most useful. 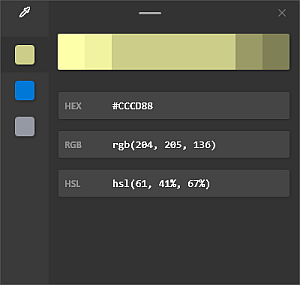 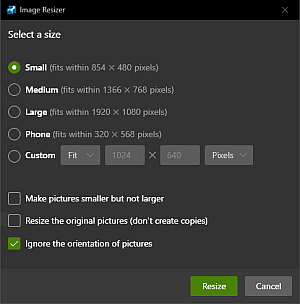