Host Paul Woolard opened the June meeting, this month with all members back at home joining the meeting via Zoom. After a short introduction outlining his aborted travel plans, George Skarbek presented his normal Q&A segment.

Q. Windows has offered me update 21H1. Has anyone had any problems with this update and should I accept the offer to update my Windows 10?

A. I accepted the offer and had no problems with the update. I would answer yes, go ahead and install the update. I’ve found it stable and includes a number of worthwhile security updates.

Q. I’m interested in your use of RAM drives. My Samsung SSD has something called “rapid drive”, which according to Samsung increases the speed by up to 8 times. Is that any better than a RAM drive? If I initiate “Rapid mode”, the speed goes from 500 to 4 or 5 thousand.

Q. To follow on from that question, you obviously would move the Temp file to a RAM drive, but what else would you recommend moving to a RAM drive? Would you install any programs on a RAM drive?

A. I use both Chrome and Firefox so I moved their temporary files to my RAM drive. Chrome creates temporary drives “like you wouldn’t believe”. After several session using Chrome, you would have many hundreds of MB’s in several thousand files. To put Chrome on a RAM drive is difficult. I had to use an obscure DOS command to make a symbolic link so the application thinks its writing to the C drive.
I have 16GB of RAM and have allocated 5 GB to a RAM drive. A SSD has a finite life and when you’re writing to it continuously, as Chrome does, not only does it slow things down, it also shortens its life. By writing to the RAM drive, when you power the computer off all the temp files disappear.
When I’m doing video editing or using Photoshop, I point all the temporary files to the RAM drive. Under preferences you can point all the temporary workspace to the RAM drive. Again, it’s faster and saves wear and tear on the SSD. You only need to set this up once under preferences, and in future the application remembers where to store the temporary files. With Firefox you only need to do this once, but when Chrome updates, it sets the redirections back to the C-drive, so I use a batch file (.bat), to save typing in a long command line to set the Temp files back to the RAM drive.

Q. Do you turn your computer off on a daily basis?

A. Yes, every night. On the rare occasion I may forget.

Q. I had Office 365 through Melbourne PC. After the changeover to Google, I wanted to continue using Microsoft Office so took out a subscription to Office 365 family, under the same name and email address as I used through MelbPC. When I log into Microsoft, I have 2 accounts under the same name and with the same password. I now find I can’t link my previously saved Excel and Word documents. When I try to open Word documents sent to me by email, I can only open it in WordPad. Any of my Excel files won’t open at all. I’ve been given a number of solutions which I don’t completely understand. Is there someone that I can call on to help? I’m reluctant to call Microsoft based on the experience others have mentioned when trying to get help from Microsoft.

A. I can’t answer your question but can give you a little advice. If you click on a file and it doesn’t open automatically with the Microsoft product, if you right click on the file and select “Open with”, will that open the document? (Member answered “No”).
I’ve found on the very rare occasions I’ve had to ring Microsoft, I found them very good. It will be a free call as it’s a product you own and relates to the installation of a Microsoft product. If the person you speak to can’t help ask to speak to their supervisor.
[John Hall] I endorse George’s comments. You most likely have a conflict between your original private MelbPC Microsoft account and your current Office 365 account. I believe the only way to resolve that conflict is for someone at Microsoft to stop you accessing the original works account.

Q. The MelbPC email address we now have with Google Drive, is that our current Google address?

A. [John Hall] Yes. You have created a Google account with your MelbPC address, but it has a different password.
[George] One advantage with your Google account, is that it lets you backup to Google Drive automatically and it’s free up to a certain limit. It’s worth looking at Google drive and the automatic backup option. It’s very good and relatively easy to setup

Q. I use Firefox for my YouTube channel and recently signed out of Firefox by accident. When trying to sign back in with my 4-digit password it was rejected, saying I had to use an 8-digit password with upper- and lower-case letters, numbers and special characters. I updated the password but instead of opening up my existing channel account, I was given a new account using the same channel name. I now find I can’t open the original account or add to the 200 videos. How do I go about contacting YouTube to correct this, as they don’t have any email address I can find?

A. “I’ll tell you how, with great difficulty”. Maybe try ringing them as you indicated you have a phone number to ring.

Following Q&A, Trevor Hudson played a video he’d prepared and uploaded to YouTube titled “How to Convert Text to Speech”. In this video Trevor uses Google Cloud to read text with a chosen voice, speed and pitch. He then showed how to use a Google Chrome Extension to save the recorded speech as an audio file in mp3 format. Rather than use his own voice in the video, Trevor uses a selection of voices from some of those available. One of the voices available and used was an Australian male voice. Trevor found using a speed setting of 0.85 and pitch of 0.00 worked best for his audience.

The text to speech service is free from Google for the first 1 million WaveNet characters used each month. According to Google, “A WaveNet generates speech that sounds more natural than other text-to-speech systems. It synthesizes speech with more human-like emphasis and inflection on syllables, phonemes, and words. On average, a WaveNet produces speech audio that people prefer over other text-to-speech technologies”

To access Google Cloud Text-to-Speech, type “https://cloud.google.com/text-to-speech” in your browser’s URL bar. In the video Trevor used Chrome, however I found the service works just as well in Firefox. The first step is to paste text into the “Text to Speech” box under “Demo”. Next select Language, Speed and Pitch. To finish press “Speak it” then tick the “I’m not a robot” box to hear your text read.

Paul Woolard gave the next presentation, titled “Handy Resources for System Maintenance”. Paul is a regular reader of websites Make Tech Easier at www.maketecheasier.com, and Make Use Of, at www.makeuseof.com. To encourage members to view these websites, Paul’s presentation highlighted some of the recent articles he thought would be of interest to MelbPC members. The presentation was not intended to be a tutorial, but simply one to list the headings and provide a link to the articles.

The final presentation of the night was by Dave Botherway who looks under the bonnet of the Windows 10 utility, Task Manager. To find Task Manager click on the Windows Icon and start typing “Task… “. Task Manager should appear in the search box before you enter the fifth letter. Select Task Manager and press Enter to run the program. Alternatively use the keyboard shortcut Ctrl + Shift + Escape to bring up Task Manager.

For most users, when Task Manager is opened for the first time, a window opens showing programs currently running. (Figure 5) Selecting the “More details” arrow at the bottom of the window, displays a lot more details about what is going on. The tabulation in this enlarged table lists all the applications running. There are a number of headings in the Window, each of which Dave explained and I’ve summarised below. 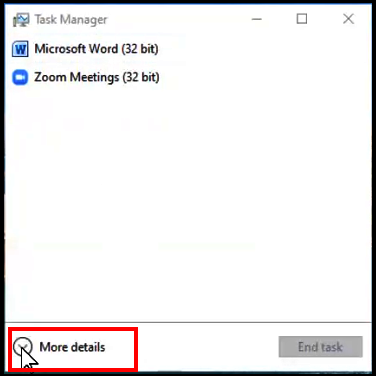 Task Manager
Selecting the “Processes” heading shown in Figure 6 displays the information listed below, for each running program.

Clicking on one of the headings, for example Memory in Figure 6, updates the table and lists programs using the most memory in descending order. Selecting the “Performance” heading shows a graphical presentation of the percentage use of each of the following.

To illustrate the above, Dave displayed graphs available under the Performance heading during a recent Windows update. The image below shows the graph of the WiFi signal. Note the smaller graphs to the left which show CPU at 100%, memory at 59% and Disk at 45% usage as the update progresses. Selecting the “App history” heading displays resource usage for the various apps running on the computer.

Selecting the “Users” heading shows which users are logged on. This can be useful if more than one person is logged on at a time to show each users PC’s CPU, Memory, Disk and Network utilisation.

Selecting the “Details” heading shows names and PID of programs, their status (i.e. whether running or Suspended), the username, CPU usage, memory being held and UAC virtualisation.

Selecting the “Services” heading shows the PID and description of the service, its status (i.e. whether the service is either Running or Stopped) and its Service group. 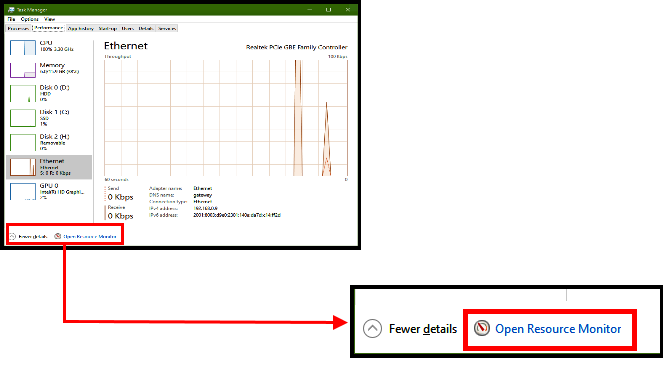 When Dave selected the “Disk” heading, the tabulation showed which processes were currently reading or writing to the disk. In the panel below Dave showed which files are being written to or being read. All this information is displayed in real time.

The current network activity was shown when Dave selected the Network heading. This can be very useful to determine why a PC may be running slow, which systems may be taking up the CPU, what processes are running the hard drive and even using the IO. When Zoom was running, Dave was able to show which IP address Zoom was going to.

Router Bottlenecks
To conclude the presentation, Dave played an entertaining YouTube video “Why does my Internet Connection Randomly Stop Working” at https://tinyurl.com/3azws33t.

Questions followed and the meeting concluded with informal discussions between audience members related to a question to George on a printer problem.