Instead of forcing family, friends, and user group members to type a long, convoluted password to access Wi-Fi, use your Android phone to make a QR code including the password, enabling all to connect by scanning the QR code.

The primary purpose of QR codes is to convey useful information in a form that a smartphone, tablet, or computer can read. Any situation where info has to be hand-keyed can be improved by offering a QR code containing the same information. Recent Android and Apple phones and tablets models can read and apply the info contained in QR codes.

The second advantage of QR codes is to avoid the hassle of typos. Of course, that hassle factor increases as the length of the hand-keyed info increases, making a QR code even more attractive.

QR codes contain various types of data. Some of the data types are URL (web page address), vCard (street address and phone numbers), and email (including recipient email address, subject line, and even the message text).

In this article, you will learn how to use your smartphone or tablet running the Android 10, 11, or Android 12 operating system to create a Wi-Fi QR code and store it as an image, just like a photo.

You will learn how to test the QR code to make sure it works. Then you can display it, enabling anybody nearby to scan it and connect to the Wi-Fi network, and you can print it, so it can be posted for others to scan even if you are not present at the time.

At that point, your Android device has all the info required to create a QR code. It has the network name, the password, and the network encryption type.

This article was prepared, and screens were captured using Android 12.

The Settings app that enables you to connect to the Wi-Fi network and type the password can create a Wi-Fi QR code for logging in to the network. 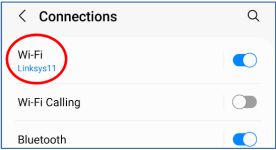 Open the Android 10/11/12 Settings app, and tap Connections. You should see a screen like that depicted in illustration 1 , with the Wi-Fi network SSID at the top. Tap the SSID, which is circled in the illustration. 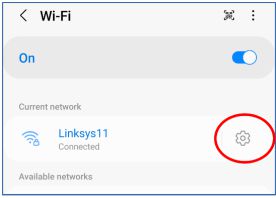 You should see a screen like the one depicted in illustration 2. The SSID appears under the heading Current network. Tap the gear icon to the right of the SSID, which is circled in the illustration. 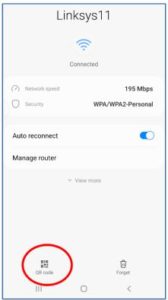 You should see a screen like the one depicted in illustration 3 . Then, tap the button labeled QR code at the bottom left, which is circled in the illustration. 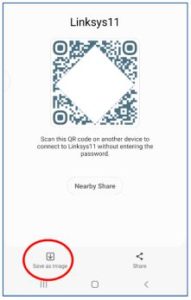 You should see a generated QR code as in illustration 4 . I blocked out part of the code for security purposes; anyone could log into the network with the entire QR code.

Tap the button in the lower-left corner, labeled Save As Image, to save the QR code image on your device. That button is circled in the illustration.

On my device, within the DCIM folder, the QR code was saved in the internal storage folder named Pictures.

Before you make the Wi-Fi QR code available to anyone else, it is a good idea to test the QR code.

The test consists of these steps:

1. Get in range of the Wi-Fi network.

2. Force the Android device to Forget the Wi-Fi network

3. Scan the Wi-Fi QR Code image stored on the device.

HOW TO FORGET THE WIFI NETWORK

HOW TO TEST THE WIFI QR CODE IMAGE FILE

Then tell your Android device to scan the same QR code saved in the device.

Pull down the Shade menu from the top of the Android screen. 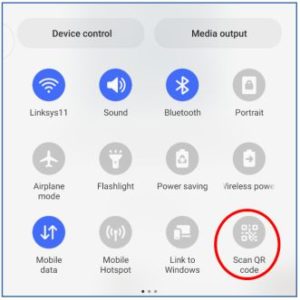 On my Android phone, the Shade menu pulls down halfway. A second downward swipe pulls it down, revealing the Scan QR code button circled in illustration 5. Tap that button. A camera window opens, displaying the legend Find A QR Code, as shown in illustration 6. That screen includes a button to scan a photo file instead of a displayed or printed QR code. That button is circled in the illustration. Tap that button.

In my case, after scanning the selected Wi-Fi QR code image in Screenshots, the Settings app connected to the Wi-Fi Network immediately. I confirmed that by switching to the Settings app and checking for a secured Wi-Fi network.

OLDER VERSIONS OF THE ANDROID OS

The Settings app on my Galaxy Tab S5 lite running Android 11 displays the same user interfaces in a column instead of displaying an entire screen, but the steps for creating a Wi-Fi QR code and testing it are identical.

Older versions of the Android OS can install a free app such as QRbot that will scan QR codes and make appropriate use of the info provided by the QR code, such as logging into a Wi-Fi network. Illustration 7 shows the icon of the QRbot app.

Although the QRbot app can make Wi-Fi QR codes, those codes lack a mandatory data element included by the Android 12 Settings app. As a result, Wi-Fi QR codes produced by QRbot will not work on most consumer-grade Wi-Fi routers.

ABOUT THE AUTHOR: John Krout is a retired software engineer living in Arlington, Virginia. He helped design, code, test, and document software for many federal agencies during his career, mainly in C and C++. He has been writing about creative uses of computers since the early 1980s. Now he also writes about smartphones, tablets, and digital cameras.