Q: I received an email from Google Map Timelines in early September titled “Your August in Review”. The email stated “You received this email because you opted-in to Location History with this Google Account”. The email included a link titled “Explore Your Timeline” which opened to a calendar and timeline in my browser. When I select a day I was shown routes travelled that day.
On a recent photographic trip to Gippsland during August, I had the GPS turned off on my camera and phone yet Google was able to pinpoint the exact shops and places I visited. I did pay for one meal at a hotel by credit card, but Google shouldn’t have access to the hotel’s financial records to know I was there? The email also said I drove for 11 hours that month which seemed plausible. Photos taken that day did not have GPS enabled and were not saved online, therefore the location information did not come from them. How does Google do this with the GPS off?

A: Stuart Bedford answered stating he had a similar situation when he visited Eastwood shopping centre recently. With everything on his phone that could track his movements turned off, he later received a message thanking him for visiting a particular store where no items were purchased. Stuart is also in the dark as to how Google can track you in that situation. No answer was forthcoming.

(Tech Ed: Google not only uses your phone’s GPS to determine location, it can also use mobile towers and WiFi points to determine your location.)

A: Microsoft says every update is advantageous and I would recommend that also. Windows does major updates twice yearly so you may not have the latest update. Microsoft’s updates may not always be to the operating system but could be a patch to another Microsoft product or a security update.
To determine what version of Windows you’re running, type “winver” in the windows search panel on the Taskbar. A window like that shown in Figure 1 below is displayed showing your current version. You should then go to the Microsoft website or search Google to see if you have the latest version and update to that if you haven’t. 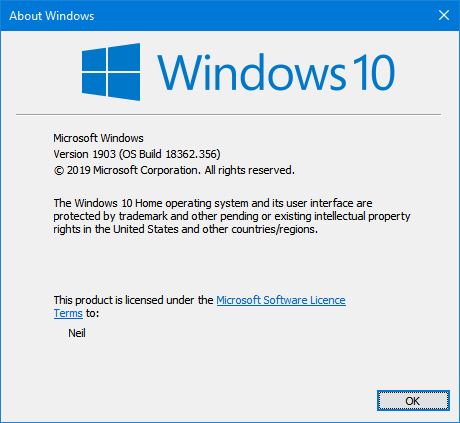 Q: Previously when I used Reply or Forward to an email in Outlook, it would be sent in the font I selected. Recently when I looked at one of the emails I replied to, I discovered the font was increased 2 or 3 times. That caused me to reduce the size of the font I use to correct this problem. However when I looked at one of those emails, the font was so small it was almost unreadable. As this has only recently started to happen can you suggest what might cause this?

A: In Outlook there is a screen setting where you can set what magnification you want to use when viewing emails. This setting is independent of the font you are using to send or reply to an email and may be the reason for your problem. As this is a recent problem, it’s most likely you unknowingly changed a setting in Outlook. To problem solve this, send an email to yourself and view it on another computer. If you don’t have a second computer, send a message to a friend and ask them what the email looks like and what font is displayed.

(Tech Ed: It may not be the cause of the problem but it should be noted that if the recipient doesn’t have the same font installed on their computer that was used to compose the email then the email may look very different at their end.)

George concluded Q&A by announcing that the USB Promoters Group has issued new specifications for USB. The new standard for USB4 will incorporate Thunderbolt 3 and the top speed will be very much faster than current Thunderbolt and SATA connections. There will be 3 speeds, 10Gbps, 20Gbps & 40Gbps. USBs adopting the new standard will be able to power monitors and will be fully backward compatible. The shape of the plug has not been determined but is likely to use a type C connector.

After last month’s (August) presentation on OneDrive, Dave was contacted by a member who could not see OneDrive on his Windows 10 computer. Dave commenced by summarizing last month’s presentation on OneDrive, then suggested the member download and installs the OneDrive app from the Microsoft store. This partly solved the member’s problem as files created on his desktop PC could now be saved to his OneDrive folder. Using the same desktop PC the member could still not see earlier files stored on OneDrive when viewed in Windows Explorer. Earlier files saved to his MelbPC OneDrive via Office365 are all visible but only when viewed in Office 365 in his Firefox browser. Dave suggested syncing OneDrive would most likely solve this issue.

Figure 2 – The OneDrive app shown in the Microsoft store

The next item Dave discussed was a Dual Band USB3 WiFi (802.11ac1200) adapter he recently purchased on eBay for under $18. The adapter was purchased to give his desktop PC easy 5G WiFi capability, simply by plugging the adapter into a vacant USB slot. The 5dBi antenna can be used straight or bent at right angles to the USB slot (refer Figure 3) to maximize signal strength.

Using an old notebook PC to test the WiFi adapters performance, Dave obtained a ten times speed improvement on the 5G band over the notebook’s inbuilt 2.4G WiFi. It’s important to note that a PC won’t benefit from the 5G capability of this adapter if you’re using an older modem that only delivers a 2.4G signal.

At last month’s meeting, NBN connections Fibre to the Premises (FTTP) and Fibre to the Node (FTTN) were discussed during Q&A. When a MelbPC member told Dave he was soon to obtain a Fibre to the Curb (FTTC) installation, Dave expanded on those earlier discussions with a brief overview of FTTC.  FTTC is a more recent technology used by NBN Co and is less common than FTTP and FTTN so is often ignored when discussing NBN connections (Tech Ed: FTTC is being used around parts of Melbourne that predominantly have HFC connections but require infill due to suburb expansion – rather than build out the HFC network, NBNCo appears to favour using FTTC).

The graphic and images below are from the NBN website https://www.nbnco.com.au and show what a FTTC installation will look like within your premises. With FTTC there is no external box attached on the dwelling as the fibre is terminated in a nearby (formerly Telstra) pit in the street. From that pit your existing copper wire phone connection to the house is used for your internet connection.

For those members receiving a FTTC connection, NBN Co will supply a NBN Connection Box and a cable that plugs into an existing standard telephone wall socket. Also supplied is a power cable to power the Connection Box. The image in Figure 5 shows the Connection box and two cables supplied by NBN Co. Figure 6 – A typical NBN connection to your modem

FTTC differs significantly from other NBN connections in a number of ways. Firstly a small number of households, possibly up to 4 or 5 can connect to the internet from the single “mini node” housed in the old Telstra pit in the street. Secondly the NBN Connection Box sends a small amount of electrical power to the NBN equipment in the pit in the street. The latter differs from a Fibre to the Node (FTTN) installation where a battery backup system is installed in the street cabinet housing the node.

After a break Stuart Bedford took many of us down memory lane with his presentation “My Journey from 405 line Black & White to a 4K Digital UHD Smart TV”.

Stuart’s first TV was a 12 inch, 405 line black and white TV. This was in 1957 where only one channel, the BBC was available and the TV was rented for $5 a month from RadioRentals. TVs of that era were analogue and required continual adjustment of the Vertical Control knob to keep the picture from rolling. 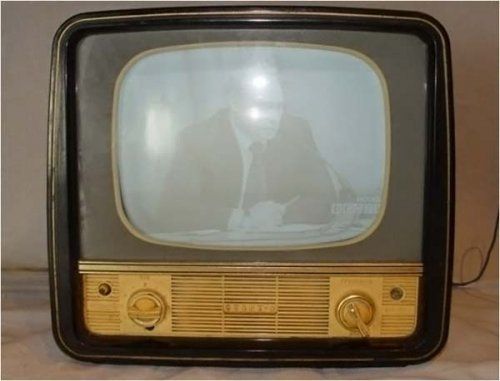 Ten years later in 1967 came Stuart’s first colour TV. This was still an analogue TV but now had 625 lines in glorious colour. Test patterns were a feature at that time where viewers adjusted the colour and shape of the picture, the latter using a circular section of the Test Pattern.

There were no remotes and channel changing was done manually. When remotes arrived the first types were connected to the TV via a long cable. Later remotes used ultrasounds to channels up/down and volume on/off, followed by electronic remotes that used piezoelectric crystals. Stuart noted that the first colour transmission in Australia was in Brisbane around 1974/5.

Digital Television in Australia commenced in 2001 with analogue being phased out in 2013. Digital had many advantages over analogue which was prone to noise, ghosting and distortion, while digital suffered now of these. Analogue TVs used CRT tubes and had a maximum size equivalent to Standard definition or 720 x 480. With the development of cheaper flat panel screens replacing CRT TVs, digital development was “fast and furious”.

Today Stuart enjoys a 65 inch 4K (3840 x 2160) TV with features you could not imagine 60 years ago. Apart from viewing traditional free to air TV, Stuart’s Smart TV can play 3D videos, connects to the internet via wireless or Ethernet cable and runs a Firefox OS allowing the loading of apps, particularly YouTube which is an important source of information and entertainment for Stuart. It has Bluetooth connectivity although this proved a little troublesome when Stuart recently attempted to connect to Bluetooth enabled headphones. The TV can be voice controlled, can stream videos and photos from any Windows PC on his network and can mirror a smart phone or laptop PC. Stuart doesn’t use many of these features but listed what’s offered to shows the extensive range of features available. Stuart warned that buyers need to be aware as some cheap 4K TV’s don’t always have the smart capability he enjoys.