How to become a Linux expert by installing Arch

You too can amaze your friends and colleagues by becoming a LINUX EXPERT who runs the very best rolling distribution – Arch Linux.

For various reasons, people regard Arch Linux as a Linux distribution requiring a true Linux expert to install and run it. And yet YOU can do it, and it’s much easier than you think.

What is a rolling distribution?

“Ordinary” distributions, such as Ubuntu, Linux Mint and the like release mew versions every six months or so. Some distributions – Debian is a well known example – may be on a two year release cycle or even longer. Slackware, once one of the most important distributions, hasn’t released a new version in over 5 years.

During the currency of these releases, programs and system utilities are not upgraded unless urgent security considerations make it absolutely essential to do so. So if some new version of a software program has a feature you have to have, you won’t get it until a new version of your distribution appears and you go through an (often lengthy) upgrade process.

Rolling distributions like Arch Linux, Debian Testing or Open SUSE Tumbleweed, issue updates constantly – often daily, That means that every program on your system is up to date and running the very latest version. And it also means that you will never have to reinstall your chosen rolling distribution ever again.

You’ll need a good reliable internet connection, but the payback is that you’ll always be running a cutting edge system. And currently the most popular rolling distribution is Arch Linux or is based on Arch Linux.

1. Sheer kudos. As I will explain below, Arch Linux is considered a difficult distribution in install and set up. Tell your Linux aware friend that you are running Arch and you will immediately gain their respect and awe.

2. Arch provides a wide range of software – almost anything you could possibly want is available, either through its main repository or via a supplementary build script repository known as the AUR.

3. Arch provides you with an almost unique ability to set up your Linux system exactly as YOU would wish – no having to accept choices made by some third party developer. An Arch system can be as lean and fast, or as complex and flashy as you the user wishes. You have a greater ability to control exactly what is installed that almost any other distribution.

4. (Best of all) Arch provides documentation which far surpasses that available from any other distribution. Almost any software or hardware issue you are likely to encounter will be covered, and covered in simple plain language. So why is Arch Linux supposed to be so hard to install?

Arch Linux is aimed at experienced users. When you download and run an Arch installation .iso you will simply be confronted with a text prompt waiting for your input. 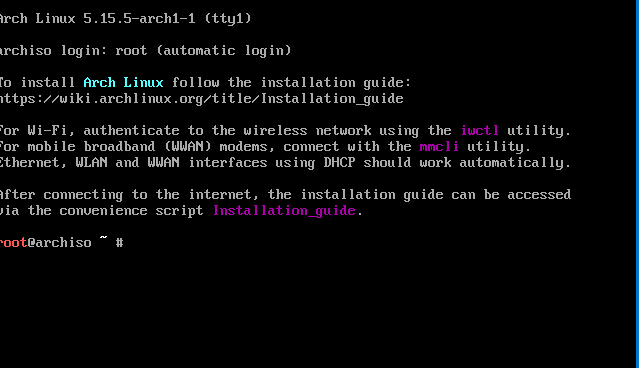 The default installation method is to manually enter a series of commands, which, if correctly completed will result in a text based Arch installation. (see https://wiki.archlinux.org/title/Installation_guide)

Following that, you follow a further set of instructions to set up your chosen graphics environment and install your software – fortunately with the assistance of an excellent package manager. (see https://wiki.archlinux.org/title/General_recommendations)

Manage all that without mistakes, and you can see why you will have earned your reputation as a Linux expert. But there are other ways in which you can achieve you chosen goal – and not all of them are quite so difficult.

So how do I install Arch Linux?

1. Go with the default method as described above.

It works and it will certainly teach you a good deal about the nuts and bolts of an Arch Linux installation. I would recommend that if possible you should install using legacy BIOS mode rather than UEFI as partitioning and set up for the latter is rather more complex.

But the procedure works and I would recommend that every Arch user tries the default installation method at least once – even if is on virtual software such as VirtualBox, rather than on your actual physical hardware installation.

Since mid 2021, Arch has included the ability to run an “archinstall” command as an alternative to the default procedure. This command runs a text based script which will walk you through much the same procedure as the default installation and will even give you the opportunity to install one of a range of popular desktop environments. 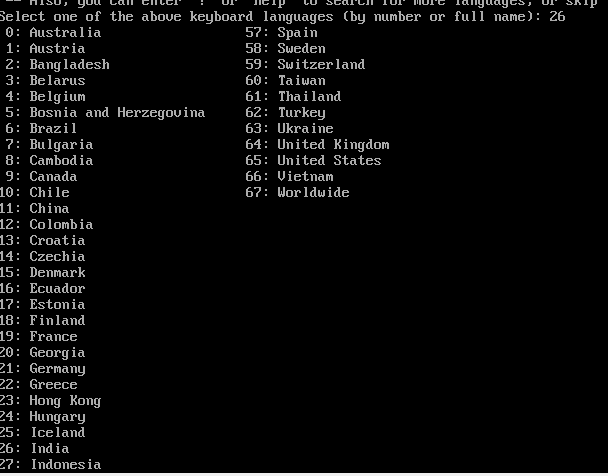 Consider this as an installation aid rather than a full installer, however using archinstall will in most cases significantly shorten the time and difficult of an Arch Linux installation. This method has some quirks but I’ve generally found it to work quite well on physical hardware, however it can be somewhat buggy when used on VirtualBox. Your mileage may vary, however.

3. Use a third party installer

This installer is hosted at Sourceforge – see https://sourceforge.net/projects/blue-arch-installer/ and is presently being updated monthly.

Running the Calam-Arch .iso provides a simple Xfce4 based installation of Arch Linux however this is simply provided to run the Calam-Arch installer and cannot be installed as is. The installer runs a customised version of the open source Calamares installer and works very well at installing a fully up to date version of the distribution plus a small selection of popular desktops, It’s a “live installer” – all packages are directly downloaded from the Arch Linux repositories. Your chosen desktop environment will be installed in more or less its default configuration and with minimal additional software. It’s then up to you to set up things as you might wish, and to install whatever additional software is needed – using the excellent pacman software installer. This means that, as with a conventional Arch Linux installation, your installation can be as simple or as complex as you wish.

You won’t learn quite as much about the inner workings of Arch, but you will get the job done easily and quite quickly. And you ARE most definitely running Arch – no need to tell anyone else HOW you installed it!!

EndeavourOS is technically an Arch based distribution rather than a pure installer. However if you select the optional ‘online” mode, EndeavourOS acts as a live installer in almost the same manner as Calam-Arch. As with Calam-Arch, your chosen desktop environment is set up with minimal additional software although some EndeavourOS formatting is applied to get you started. You are also provided with a useful start-up utility to help you complete common tasks, but other than that you use the standard Arch utilities to install additional software and complete any required set up.

Live installers of this type do need a fair amount of RAM – if you are testing either of these installers in a virtual environment like VirtualBox and the whole system, including the system clock, freezes then you have most likely run out of memory. Increase the memory allocation of your virtual machine and try again.

There are quite a number of distribution based on Arch Linux, many using a user friendly installer (often the open source Calamares installer) and seemingly providing a quick and easy way to install Arch. But as almost all of these are based on snapshots of Arch at the time the distribution was released, I do not recommend their use.

You could easily find yourself having to deal with many months of updates – a highly undesirable situation in a distribution designed to be updated no less frequently than weekly. It may well be impossible to complete the update in some instances.

There is however one exception.

This distribution is currently third on the top 100 list provided by https://distrowatch.com/ and has held second or third placing for many months. And in my view there is good reason for that high placing. Manjaro provides a fast and easy method of installing a version of Arch Linux that is known for reliability and most especially, its user friendly approach.

The distribution provides a number of different versions, each featuring a specific window manager though the ‘flagship’ edition uses the XFCE4 window manager. All are installed using the Calamares open source installer and provide a complete and fully configured installation – as befits its target market of the less experienced user.

While Manjaro is ‘snapshot based’, its altered update policy (see below) means that you will have no difficulty updating your installation as needed. Regular update versions are issued.

Manjaro is technically a separate distribution to Arch Linux as it uses its own repositories, however these are fully compatible with the Arch repositories, Anything that could be installed in Arch, can be installed in Manjaro. However Manjaro adds additional user friendly touches such as:

I’ve found this distribution to be highly reliable over the years – highly recommended for users who as yet lack the confidence or experience to tackle a pure Arch installation. Install this and you will quickly gain experience in managing an Arch based system.

So what should I do if things go wrong?

As mentioned before, Arch Linux provides by far the best documentation of any Linux distribution – almost any problem can be solved by consulting the Arch Wiki.

I’ve found that a Google search in the form “Arch [brief description of problem]” or “Arch [error message]” will almost certainly take you straight to the Arch Wiki page dealing with the issue. The Wiki uses clear easy to understand language and should solve any issue you encounter. Almost all of the content is applicable even if you installed a related distribution such as EndeavourOS or Manjaro. You will be expected to have attempted to solve your problem by consulting the Arch Wiki. So if you have done so and failed to find the answer you needed, or if you did not understand the information you found, make sure you say so when posting.

And if you have installed a non Arch alternative (such as Manjaro) or even if you used an alternate installer, do NOT mention that fact. If you do, you’ll almost certainly have your query closed immediately.

3. Yammer (or its replacement)

You will always find friendly and informed help in the Yammer Linux forum – a HUGE advantage of being a MelbPC member!!

And lastly…Congratulations you are now a Linux Expert

It matters not how you did the job, if you installed an Arch or Arch based distribution using one of the methods described in this article, you deserve to bask in the kudos of having installed the very best rolling distribution available.

And if you’re yet to take the plunge, make this your 2022 project.