The “Let’s Make It” theme invited many other like minded groups to exhibit their projects which showcased each groups knowledge, expertise and ingenuity in the various areas of technology and engineering. It was held at Oakleigh South Secondary College on the weekend  of 5-6th October 2019.

Located at Bakers Road off Centre Road, is roughly 3km away from our Moorabin premises.

For the two days, the school’s STEM students and teacher were available to showcase student projects.. Some Arduino, but predominately BBC Microbit board based projects using Scratch as the programming language of choice.

This the second year in which the Microcontroller Interest Group has represented our club at this exhibition. Last year we had some additional support from the Science and Tech Projects Group. Replica IMSAI 8080 is fully working front panel running 8080 code as can be seen in the Windows 7 terminal window in the display above the unit (Modern ESP32 controller used to emulate an early PC.

Talking Billy Bones was singing sea shanties with the mouth moving in sync with speech was a great source of  interest from the students and many others passing by. John had dramas with his solar tracker as he had damaged it just a week before and needed to repair it for the show. It has been heavily modified since its last showing with vast improvements in the programming (Arduino Nano powered) Brian was printing trolley tokens for visitors to our stand. This little amazing printer produced excellent first up prints and costed Brian less than $230 delivered from eBay when he bought it. This scrolling sign was a long term project that was to be available for last year’s exhibition and was a last minute decision to get it done. So in between organising / transporting stuff and stand set up over a period of twelve hours parts were fabricated and finally all the parts were put together the night before the exhibition opened. The Arduino code was only loaded, modified, debugged  just before leaving for the show Saturday morning.

The rest of our display consisted of many photos of our workshop facilities  which featured Brian in our garage work area. All photographic image composition work was by George Skarbek. 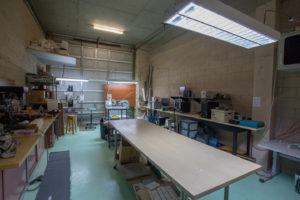