While last month saw the 30th anniversary of the announcement of Linux, this month marks 30 years since the first actual kernel (0.01) was released. Linux has come a long way since, from its humble origins as a DIY project for a Finnish uni student, to being used ever day by the billions of people who use Android based phones.

Bill has memories of the early days of Linux:

“That sends me down the nostalgia lane. My memory is a bit fuzzy and I don’t remember exactly how or when I installed it the first time, but as near as I can tell from the scrappy records I have it was a little over 29 years ago now. It probably meant that the version was around 0.95. Needless to say, there were many fewer users back then!

“By that time, I’d already been using computers for about 29 years. Linus’ project had created a bit of buzz in 1991/92 and it looked like it was worth a try. I’m not sure where I first heard about it but by May ’92 it looks like I was subscribed to [email protected] Back then I was using MS-DOS at home and although it appeared to be much superior, UNIX was too expensive to consider. Linux was developing fast and appeared to give a light-weight UNIX-like experience at much less cost. So I joined the effort, making one or two contributions, and went along for the ride. Things were to say the least very rough around the edges but it was all good fun and a very productive time for me.”

Not sure I’ve come across anyone who was involved earlier – I was definitely late to the show in 1999!

Bill has been doing his usual excellent job of keeping us informed of the progression of the coronavirus infections in Victoria, looking at trend lines and doubling times. A bit scary when it shows hitting 1000 cases within a week. He’s also been looking at vaccination rates and comparing the situation in NSW with that here, again scarily we’re doing worse when you match the infection curves to reflect the stages of the outbreak.

Fortunately the situation in NSW seems to have stabilised, presumably due to the increasing number being fully vaccinated so hopefully the same will be true here. 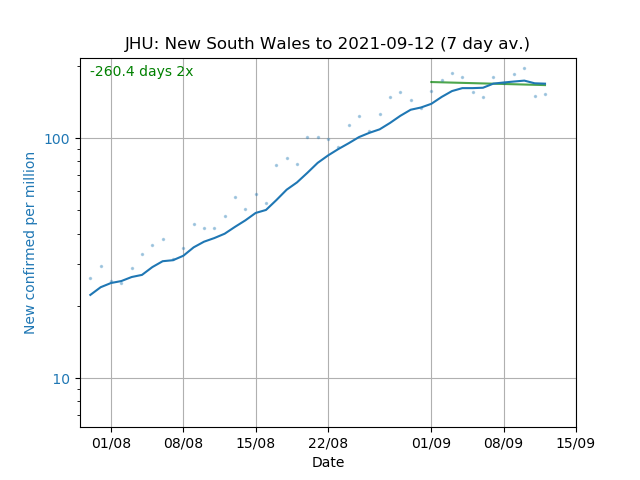 Merv had a long standing problem that he managed to finally solve with the help of suggestions provided by fellow members and a good dose of sheer bloody minded determination. For some time he’d been trying to identify a country pub from a magazine photo – he was sure he’d seen it on his travels around the country but just couldn’t remember where. He’d contacted the photographer who wasn’t able to provide the location and he didn’t want to post the pic online due to possible copyright issues so couldn’t “crowd source” an answer. The one solid clue he had was the first three letters of a street name visible on a sign, but not knowing the state made searching rather difficult.

Trying to use Google image search revealed there were lot’s of pubs with the almost identical design – the archetypal double storey country pub with wide full length verandahs. Various other techniques for searching were suggested such as entering the three letters in a GPS unit to bring up a list of possibilities but it was thought too cumbersome to try. Searching through a list of licensed premises seemed good, except the pub was on a corner and the listing might be for the other street.

The suggestion that worked was searching through a list of street names downloaded from the WA Electoral Commission along with a large dose of persistence. As it turns out Merv was caught out by the common design of the pub as he’s never been to Cue in WA.

The information surrounding the pending release of Windows 11 has been somewhat confusing causing more than a little speculation, particularly around the stringent hardware requirements.

This lead us onto a discussion of possible alternatives such as installing Linux on older hardware but also getting a bit of extra life out of an old system by adding extra RAM or replacing a hard drive with an SSD. Even adding 2GB of RAM to a 4GB system would make a significant difference and for many systems is dead easy – there are plenty of guides and YouTube videos on-line to show you how. If you can use a screwdriver you have the necessary skills to add RAM, although it must be noted that with some laptop models the RAM is soldered in place and there is no spare RAM slot. The important things are to make sure you have a spare slot available, or are replacing an installed module with a larger one, and that you obtain the right module type for your system.

Regardless, Windows 10 will be supported for another four years so you don’t have to rush out and replace your system now, but if you’re using a system with only 4GB of RAM it’s worthwhile adding more today.