Windows 11 was officially released on October 5th and while most of us probably aren’t brave enough to use it on our main system quite yet, some of us might be keen to at least have a look. The problem with this is there are fairly stringent system requirements and unless your system is under two years old it’s not going to meet them all, particularly the CPU, which is rather unlikely to be true for a spare system. Fortunately there are ways and means, provided you don’t mind performing a fresh install.

By using the Rufus bootable USB creation tool I was able to create a modified installation USB that would install Windows 11 on a 2013 vintage Lenovo Helix i5 tablet which failed the official requirements test in multiple ways. The CPU is very definitely not on the approved list, it doesn’t support TPM 2 (only 1.2), doesn’t have secure boot enabled and uses MBR rather than GPT for the drive.

The process was barely more complicated than a standard clean installation of Windows. Download the Windows 11 ISO from Microsoft, download Rufus (make sure you get the 3.16 beta version or later) and use it to create the bootable USB using the correct settings to bypass the official hardware requirements, boot from the newly created installation USB and install Windows. As mentioned previously this only works for a clean install and not an upgrade, so everything on the hard drive will be wiped.

There’s no need to provide a registration key as it uses the same “digital entitlement” as the previous Win10 installation and it appears Windows Update is fully working without any warnings, noting it’s only been four days since installation so there’s always the potential for this to change. I used my Melb PC account to create the login but will be converting to a local account given we’re moving away from Microsoft to Google based e-mail.

If you do give Windows 11 a go please feel free to join us on Yammer and tell us what you thought and if you had any problems. I’d be particularly interested in hearing from others who use Rufus to work around the hardware requirements so we have a range of experiences, particularly with respect to Windows Updates functionality. 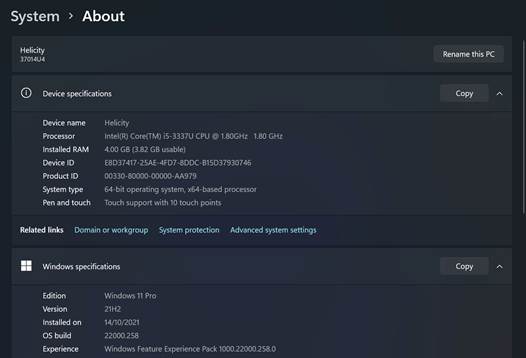 With Windows 11 now available as a free upgrade I was curious how interested our members are in using it, so I’m conducting another of our quick and dirty Yammer polls. Please feel free to add your vote, the more the merrier.

So far the numbers from our hugely statistically significant sample of 27 seem reasonably favourable for Win11, with 30% already using it or will be relatively soon and a further 33% will when they buy a new system with it already installed. 11% are considering switching to Linux to join the 7% who already are.

It will be interesting to see how it all plays out, particularly if a reliable means of upgrading an existing Win10 installation on a system that doesn’t meet the hardware requirements is developed. Provided Windows Updates continue to function correctly of course. Given that Win10 can be run on a 10 year old system it will be a shame if the same won’t apply to Win11. Maybe people will just have to bite the bullet and perform a clean install, assuming the Rufus method (as seen above) still works fully. As much of a pain as a clean Windows install is, it does start you off with a fresh system clear of accumulated rubbish. 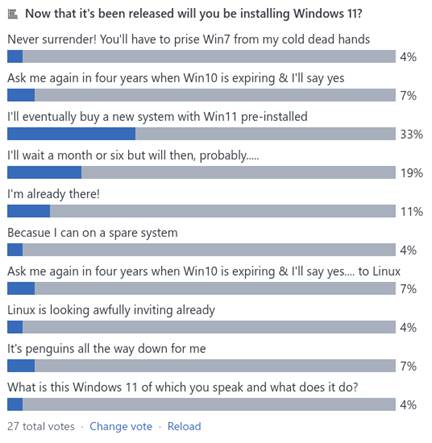 Harry related a less that satisfactory experience he had with churning his NBN service from Telstra to Aussie Broadband – it was meant to include porting the “landline” number but ended up with it being cancelled instead. It’s not clear who was to blame – Telstra could have failed to action the request to port the number and cancelled the number once Harry’s NBN service was transferred or ABB could have failed to request it in a timely manner.

To get his number back Harry had to initiate a new phone service with Telstra and then get it ported to ABB. In hindsight he thinks he should have taken the option of paying ABB $30 to set up a new account and worried about sorting out a refund later.

One of the plusses to using Yammer is you’ll often get a quick response from knowledgeable fellow members which is great if you’re dealing with something like confirming whether an e-mail is a scam or a risk to your computer.

Needless to say it was all a well known scam and entirely untrue, but it was suggested the friend change his e-mail password and scan his computer with Malwarebytes to reassure him that indeed nothing was amiss.  But good on Julian for seeking a second opinion as it reassured both him and his friend that all was well, and if it hadn’t been we could have provided assistance in sorting it out.

Another great example of members helping members – Barry was wanting to copy video recordings from 40 or so Video8 and Digital8 format tapes to his computer and was looking for a suitable video camera to achieve it. He managed to source a Video8 camera that functioned well enough to allow copying of those tapes, although he did have to manually rewind the tapes. Fortunately another member managed to find his Digital8 camera that hadn’t been used in 15 years and loaned it to Barry – it did the job nicely and he was able to copy the Digital8 tapes as well. Well done all around.

As ever the discussion didn’t stay entirely on subject and copying of slides was also discussed with offers of equipment being made for that too.