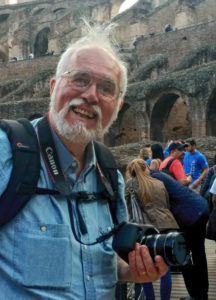 This is the last PC Update you will receive before the AGM on Wednesday 3rd November. That meeting will be online only, so votes will have to be done by email or snail mail. The details on voting are all here: https://www.melbpc.org.au/committee/committee-documents/2021-agm-notices/. Votes must be in before 3pm Monday 1st November.

Some year that was!

The previous AGM was held in February this year, delayed from the statutory November 2020 date as long as legally possible, due to Covid. At that stage we thought we were out of the woods, but it was not to be, thanks to Delta. So this year has been another year of frustrated aspirations.

Not everything has been at a total standstill, however.

Being president has been quite a learning experience for me. Although I ran a small company for many years, it was nevertheless in a somewhat isolated environment. Helping to guide this club has exposed me more deeply to more people, and more diverse personalities than before. Freed of the highly technical focus of running an electronics company, it has made me see more of the varying skill-sets, propensities, interests, and yes, quirks and biases, of the people I have worked with.

Every member of the committee has brought something different but important and useful to the ZOOM table. In the order they happen to appear on the list on my cork board:

Stephen Zuluaga, Vice President, brings a youthful energy and willingness to roll up his sleeves, in addition to being a strategic thinker.

Aidan Kelly, Secretary, has stepped up to the plate in a remarkable fashion and embraced what is arguably the most difficult, demanding and important job.

Peter McConnachie, Treasurer, offers exactly what is needed in someone who looks after the club’s financial affairs: Dependable and precise but not so risk averse as to hold back progress.

Harry Lewis is a former president who has major responsibility for iHelp and deep involvement with the transition to Google. Harry’s club history and knack with numbers are invaluable.

Speaking of iHelp: If your are able and willing to make a contribution to helping out with supporting other members, please let the iHelp team know – iHelp@melbpc.org.au

Stewart Gruneklee is a past treasurer with club history. He is one of the go-to guys for “how things have been done” and knowing the rules.

Rob Brown is one of the people I will frequently bounce ideas off. He is also the one who takes care of issues arising around the Moorabbin property and our interactions with the Owners’ Corporation, as well as liaising with our CiviCRM maintenance contractor.

Hugh Macdonald is editor of the newsletter as well as right in the hot seat for the transition to Google.

Peter Boin is in the process of engineering a meeting attendance registration system that will be rolled out to all SIGs, simply running off a smartphone.

I should also mention two committee members who resigned:

Dave Williams is a Maker Extraordinaire. We unfortunately lost him, and his skills when he moved back to Queensland and family under pressure from Covid.

Paul Hattam is a people person, something I valued in a highly tech-oriented, left-brained organisation. He was instrumental in procuring and installing our emergency defibrillator in the club rooms. Paul moved to Gippsland to re-focus his life and find employment.

What I really like about this team is that we are united in our ambition to see the club re-invented into something that can survive and serve the community for many years to come, while still having the diversity in our points of view, backgrounds, and life experiences that ensures we are not totally one-eyed about things. The youthful element gives us the energy to move forward rather than being stuck in a “more of the same” rut, while the “more mature” element ensures stability.

Editor’s note: Last month I inadvertently left an image out of David’s Presidential Musings for September 2021. Here is the section and the accompanying image republished in full, so you get the full effect of what David was trying to say. And apologies David, it won’t happen again.

Overall I see Melb PC as a club that, thanks to the heydays of being a dial up ISP, is asset rich but cash flow challenged. We have about $500K in the bank, we own our premises, informally valued pre-Covid at ~$1.3M. But we lose some money every year, at an accelerating rate – $24K this last year. But right now, with Covid, the value of Moorabbin is likely greatly reduced. Heck, office space in the CBD is going begging at the moment!

When I was brought onto the committee in 2017, and given the marketing “portfolio”, I did a presentation with the following graphic (I had been told we would hit rock bottom in 2023, which was grossly pessimistic!). Remarkably, when I called for a show of hands for one future or the other, one committee member voted for entropy. So it seems to me the path to long term survival is to exploit our natural advantages – our premises and our cash. Hence the drive to make Moorabbin more exciting, to set up Maker Spaces for a younger audience, to create a Library of Things. That said, the committee and I remain fully committed to providing for the needs of members who only ever attend non-Moorabbin SIGs. The transformations I aspire to will be gradual, and in addition to the more traditional activities such as iHelp.