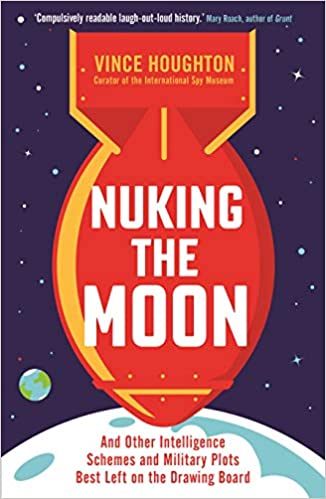 This is probably not the usual type of book you’d expect to see referenced in PC Update. It’s subtitled: “and other intelligence schemes and military plots best left on the drawing board”. Vince Houghton is Director of the International Spy Museum, perfectly placed to hear about all kinds of attempted skulduggery.

I don’t recall having heard about the US Army’s plans to stage a nuclear explosion on the moon. This was back in 1958, when America was still obsessed with Sputnik and the USSR’s apparent lead in space. Here was an opportunity to display their superiority in nuclear weaponry. Fortunately, the project never materialised.

The book covers a range of topics: using animals as weapons, the Bay of Pigs fiasco and associated attempts to assassinate Castro, Reagan’s Star Wars schemes and a variety of other proposals for using nukes. It’s an entertaining read, with some parts probably familiar. The lesson for those actively involved in computing: someone will come up with a really weird way of using every new technology, and attempt to implement it. A place for everything – the curious history of alphabetical order.

We all have our biases and we can be quite unconscious of some. After reading this book I understand that my experience of computing is very STEM-oriented, but other disciplines have contributed to our technology. We are so used to the concept of alphabetical order that we just accept it and may not realise it only came into widespread use around the nineteenth century. Even in the late eighteenth-century students at Yale & Harvard were listed by the students’ families social position and wealth, and whether their fathers had attended the same colleges.

Judith Flanders is an author of popular histories (and crime comics). Her first nine chapters are headed A to I, followed by Y (for Y2K). She traces the development of the alphabet from ancient times, then the copying of texts in monasteries during the dark ages. Modern usage echoes some medieval tropes: copyists would annotate texts so that readers could find interpretations on the same page; today we achieve similar purposes via hyperlinks.

In the days where one hundred books was a large collection librarians knew every book they had and exactly where it was kept. As government and enterprises developed there was increased requirement for information retrieval which meant that data had to be organised. One order of classification was anything to do with the divine, followed by the secular. This is still visible in the Dewey Decimal system used in libraries.

The development of alphabetical order was piecemeal, initially by first letter only, then slowly moving to absolute order. Gutenberg’s invention of the printing press led to an explosion in the number of volumes produced from something of the order of five million in the millennium before to some twenty million over the next fifty years.

The later profusion of mechanical typewriters and copying meant there was even more requirement for filing. Hanging files, box files and lever-arch files were developed with office equipment designed for them. This had a direct impact on the design of computer file systems.

Just as medieval libraries didn’t require catalogues, early telephone services did not require directories. Initial services were point to point only. However once connections to multiple phones became available, and subscriber numbers increased, directories became ubiquitous. But they were not in strict alphabetical order; there were often separate government sections. People started to use and remember telephone numbers. Now we rarely need to remember numbers and the contacts lists on our smartphones can be tailored to our requirements.