Melb PC purchased a copy of Weapons of Math Destruction after the recommendation by Michael Brand who spoke on The Data Science Revolution – A User’s Guide at the May monthly meeting. O’Neil is a mathematician who was a Professor at Barnard and has worked in finance and risk analysis and was involved with Occupy Wall Street. She defines Weapons of Math Destruction (WMDs) as being opaque, unquestioned, unaccountable and scaleable to target millions of people. By confusing their findings with on-the-ground reality, most WMDs create pernicious feedback loops.

The examples she quotes are all American. These include the evaluation of teacher performance in schools, the rating of colleges, setting car insurance premiums and health insurance coverage. These don’t have direct parallels in Australia because of our State based education systems, smaller population and different insurance models. However, there may be many who would like to see similar evaluations introduced here. O’Neil also looks at studies of recidivism in prisons. The negative feedback involved is that poorer non-white prisoners tend to be ranked as more likely to re-offend, leading to longer sentences and greater recidivism. Similarly with pre-active policing (using statistical analysis to determine where crimes are most likely to occur); police resources are concentrated on disadvantaged neighbourhoods and black and hispanic youth. The best way to avoid the effects of WMDs in the United States is to be white and rich.

Areas where WMDs may be encountered in Australia are targeted advertising, job seeking, loan applications, dating sites and shift scheduling in the gig economy. 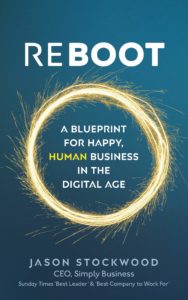 This is not a book review in the traditional sense, more an overview of a book on modern management and how the philosophies it expounds could be relevant to our club. I find it impossible to read a book on management without trying to map it into my own context.

The author, Jason Stockwood, is CEO of a successful insurance brokering firm in the UK. He took over a dysfunctional company and has guided it to reinvent itself and eventually merge with a much larger US operation. He has done that by rejecting the “classical” 20th century theories of strict hierarchical management structures, employees who tow the line, top down control and the notion that companies are there only to serve the financial interests of the shareholders. Employees, and their well being, are as important as shareholders. Without happy and fulfilled employees the company will eventually degenerate and become dysfunctional. Companies must also behave responsibly towards society and the environment, not only because it’s the right thing to but because the customers are more and more coming to expect it of the companies they choose to deal with.

Jason starts out by calling into question the notion that advances in a company’s performance can only come about through detailed planning and design, by mapping out every step, every change, and then introducing it all at once. This is something I find difficult to wrap my head around; being an engineer I feel the need to plan and design in meticulous detail before implementing a complex system. Indeed, I have brought home a number of complex projects due to a strict top-down, hierarchical design philosophy. But Jason subscribes to the practice of “Agile” management. Agile was initially a methodology for software development. The basic idea is that rather than design and write a whole huge computer program all at once it is better to start with a minimal viable product (MVP), test it in the market place, and then incrementally enhance and extend it in the light of user feedback. That way the product can become better aligned with what the customers want, which may not be what was visualised at the outset, and there is much less risk of wasted effort.

A vision, a goal

Agile management, as propounded by Jason, encourages the empowerment of employees to test out new ideas on their own initiative. In a large operation like Jason’s insurance business an idea can be tested on a limited scale to see how it works out, then rolled out across the whole company if it works. (There will be failures!). Naturally the ideas, maybe a change to the website user interface or adoption of a new technology like a chatbot, must be aligned with the overall objectives and philosophies of the company. That’s why it is important for the company, and its employees, to actually have a clear vision of where it is headed and of what its values are. It is also important to not introduce changes or new technologies without a clear idea of what value they may bring to the organisation and how they will ultimately improve the product for the customers and improve the employees’ work experience.

Jason discusses at length the role of new technology. He is especially concerned about the potential benefits and dangers. Will technology, especially AI and robots, lead to a dystopian future where people are brushed aside and become redundant? Or can technology in the workplace be judiciously deployed to make work more meaningful? One thing is for sure: Technology will change the nature of work, though exactly how is hard to predict. What Jason is doing in his company, and he cites other companies with similar strategies, is to offer employees opportunities to acquire new skills that will have value into the future. He also has a strong view that employees must not be made redundant by new technology, if only because the negative effect on morale, and hence productivity, of seeing colleagues laid off due to technology would be far too costly.

Like most such non-fiction books I found Reboot too repetitive; it’s almost as if the author has to spin out and drip feed the ideas so there’s enough to fill up a whole book. That said, the ideas presented are intriguing, beguiling even. I think, too, there is a message for our club in there, especially the importance of having a vision for the future, not just long-term but also short term. The Agile concept is also something that probably needs to be part of our modus operandi going forward, if only because it is something that fits with the mental processes of younger people, and we need young people to take the club forward. I do however believe that agility must be tempered with the common sense to not introduce change just for the sake of change, especially where it may confuse or distress the “more mature” members. It should be a tool in the arsenal, not a religion.